David Ragan: I Will Think About It the Rest of My Life 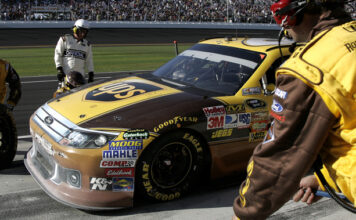 Even as David Ragan, driver of the No. 6 UPS Ford for Roush Fenway Racing, prepares for the upcoming Phoenix race, Daytona is still on his mind.

In the final laps of the Daytona 500, Ragan was in charge, working with Trevor Bayne in tandem and leading the pack. Yet on the final green, white, checkered restart, Ragan made a major mistake, changing lanes before the start finish line.

[/media-credit]Ragan was black flagged and his error cost him the victory in one of NASCAR’s most prestigious event.

“I absolutely thought we were going to win,” Ragan said. “We had a great car all day and we had an opportunity there at the end.  The violation, the black flag, took the wind out of our sails.”

“I didn’t want to believe it at first,” Ragan continued. “I felt like the black flag was for Tony Stewart for passing on the outside.”

“I knew that I had started to make my way toward the bottom but didn’t feel like that I changed lanes to improve my position because I was the leader,” Ragan said. “So, I didn’t fully interpret the rule like NASCAR did. Therefore, I didn’t think we did anything wrong.”

“I thought they were warning us or that the black flag was for someone else,” Ragan continued. “So, I denied it for a lap or so.  Then I finally realized this is really happening.”

Ragan still does not fully understand the interpretation of the rule that resulted in the penalty. After the race, he said that he most definitely wanted to seek out Mike Helton, President of NASCAR, to further discuss the situation.

“I haven’t talked to him yet,” Ragan said of Helton. “I’ll catch him in Phoenix. I understand what the deal is but I’d like to hear it from those guys as well.”

In spite of finishing top 15 and currently being 13th in the Sprint Cup standings, his mistake, the black flag and his win slipping away from him will always haunt him.

“But we have to stay focused on what’s in front of us,” Ragan continued. “We learn from the past.  Of course, you’ll never completely forget about it but we’ll take from that day and hopefully it will make us stronger.”

Now that Ragan has also had a few days to reflect, he has realized that there were many positives for him and his team to take forward from his experience.

“Throughout the whole race, we put ourselves in position to win,” Ragan said.  “We didn’t make any mistakes on pit road.  I did a nice job on the race track not getting caught up in any of the wrecks.”

“So, those are some positives to look at,” Ragan continued.  “And then the last call, I’ll always make sure now that on any restart that I’m aware of the rules and the way that the governing body interprets them.”

“I’m happy for Trevor,” Ragan said.  “If our UPS team couldn’t win it, I couldn’t think of any other guy to do it.”

“The Wood Brothers deserve the win, and Ford Racing, and this kid, I say a kid even though he’s just a few years younger than me, he promotes believing in the Lord and I think that’s great,” Ragan continued. “It’s good for NASCAR.”

“I’m not going to lie, I wish I were there,” Ragan said of his missed chance to be in Victory Lane.  “But if we couldn’t do it, I’m proud for Trevor and I feel like we played a part in getting him there.”

Having said that, however, Ragan acknowledged that he is more than ready to put the Daytona finish in his rear view mirror and move forward.

“If we can go to Phoenix, if we can lead some laps and run in the top ten throughout the race, I would be happy with that,” Ragan said. “I have a lot of confidence in our team.”

“The sooner that we can get there, the sooner we can forget about this one,” Ragan said. “It’s a long season.  I have to keep my head up and keep our eyes on the prize.”

SM Staff
Previous article
Trevor Bayne – ‘To Everything there is a Season’
Next article
Bayne, Woods Head to Phoenix Still Savoring Daytona 500 Triumph