Trevor Bayne – ‘To Everything there is a Season’ 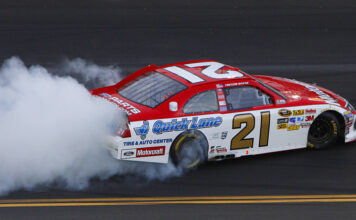 [media-credit name=”CIA Stock Photo” align=”alignright” width=”270″][/media-credit]
Like every other NASCAR fan I had been looking forward to the Daytona 500 since the end of last season.  The track repaving and the anticipation of not knowing what to expect created a new buzz for NASCAR’s premier race of the season.

Then in the blink of an eye, everything changed. I received a call on February 2nd and found out that my brother had been killed in a senseless accident.

Suddenly I seemed stuck in a vacuum while the rest of the world swirled around me. Time stood still and the only thing that mattered was that I had lost my big brother.

He was six years older than me and I always looked up to him. I listened to the same music and shared his love of fast cars. I even had a few teenage crushes on his friends.

As the days passed, my emotions took over and I all I could do was hang on and try to ride out the storm. For the first few days, I couldn’t bear to close my eyes. All I could see was the tragedy that took my brother’s life. One minute my heart was breaking and the next moment I found myself angry at the world.

This isn’t the way it was supposed to happen. I never even got to say goodbye.

I watched the Budweiser Shootout, qualifying and the Duels through clouded vision as I struggled to find my way out of the fog that had enveloped me.

As the Daytona 500 approached, I wasn’t even sure if I would watch. I could just imagine all the stories that would be told on the 10 year anniversary of Dale Earnhardt’s death. My loss was too fresh and I didn’t know if I could handle the remembrances of another life lost far too soon.

Race day came and I guess old habits die hard as I found myself in front of the television watching the race. As I was waiting for the race to start I remembered a conversation I’d had with some fellow race fans on a NASCAR fan site.

Dale Earnhardt Jr. had just won the pole for the Daytona 500 and we talked about the very real possibility that he might have a shot at winning the race. We also discussed Trevor Bayne and how strong his car had been in qualifying.

This is what I told my friends.

“Highly unlikely, probably impossible, but wouldn’t it be cool to see Bayne win the 500 in the No. 21 car for the Wood Brothers? That, my friends, would be a story!”

Perhaps it’s just that Bayne was on my mind because, ironically, my brother was also born on February 19th.

I first got to know Trevor Bayne when I interviewed him in October 2009. My first impression was that this was a kid who had the potential to become one of NASCAR’s future stars. Since then I’ve had the opportunity to speak with him on several occasions and I’ve continued to follow his career closely.

As I watched the final laps of the race unfold, I had no idea who was going to win. Was Bayne really going to be able to win the 500 in only his second Cup start?

As he crossed the finish line in first place, I found myself grinning from ear to ear and I couldn’t help but laugh out loud as I heard him scream, “Are you kidding me?”

For the first time in weeks, I had completely forgotten everything else and was lost in that moment.

The excitement soon faded and I know that I will struggle daily to come to terms with my brother’s death. But I also realize that I am beginning to heal and will once again be able to feel not only life’s heartbreak but embrace its joy.

Angela Campbell
A native of Charlotte, NC, Angela (Angie) was first introduced to racing by her father. An avid fan of NASCAR, she found a way to combine her love of racing with her passion for writing. Angie is also an award-winning member of the National Motorsports Press Association. Follow her on Twitter @angiecampbell_ for the latest NASCAR news and feature stories.
Previous articleWith Sponsorship from Big Red and ALL SPORT Body Quencher, Germain Racing will Field Full Time NASCAR Sprint Cup Entry
Next articleDavid Ragan: I Will Think About It the Rest of My Life