Robby Gordon Gets Physical in the Garage with Kevin Conway 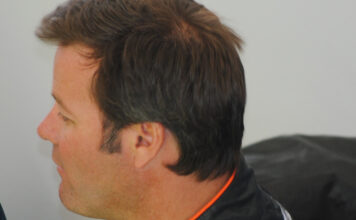 Las Vegas police officer Barbara Morgan told the Associated Press that Conway filed a misdemeanor battery complaint and police will interview any possible witnesses before turning the investigation over to the Clark County district attorney in Las Vegas to determine if charges will be filed.

“Robby’s been put on probation – we’ll let everybody know for how long on Tuesday,” NASCAR Vice President of Competition Robin Pemberton told SceneDaily. “This doesn’t give Conway a free pass, either.”

Since then, Conway has released a statement via stating what happened.

“I don’t mind stiff competition, but I want to make sure the hard facts are told,” Conway said in his statement. “First and foremost, I love being a part of NASCAR and have worked very hard to earn the privilege of competing in the Sprint Cup Series.

“On Friday night, Robby Gordon, who has a long history of issues in NASCAR decided to ambush me in the garage area at the Las Vegas Motor Speedway, completely unprovoked. Robby even confronted Joe Nemechek, my car owner, on pit road during Cup Series qualifying shoving him and telling him that he was looking for me and going to assault me. We have many witnesses including a crew chief that signed a police report documenting the truth of his physical attack on me.”

“Situations like this are not good for our sport. It’s one thing if we were racing each other and I wrecked him or he wrecked me, that’s an entirely different situation. It’s very unfortunate that he chose to physically attack me to address his rage. Our fans, sponsors and NASCAR expect and deserve more from our competitors than this bullish, illegal behavior that was displayed by Robby against me.”

Gordon had told Mike Mulhern that the confrontation was only verbal.

The argument comes following a lawsuit that has been followed. Conway says that Gordon owes him $29,000 in race earnings, while Gordon says Conway’s sponsor Extenze still owes him $700,000 for using the car. Both sides have filed lawsuits and are waiting to hear the outcome.

Gordon has a history of feuding with drivers, but he has never taken it to an extent this extreme. The last time a physical altercation to a point like this was Carl Edwards and Kevin Harvick and their tussle in the garage. No charges or probations by NASCAR were set in place that time.