Let’s Count the Reasons Bristol’s Attendance Was So Poor 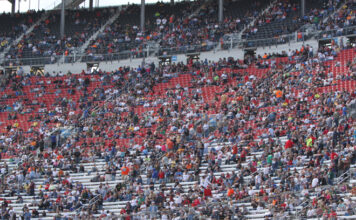 [/media-credit]Many were shocked as the Nationwide Series race approached at Bristol Motor Speedway. Why? No one I talked to could ever remember there being that many empty seats as the race began. It got worse on Sunday as the Sprint Cup drivers were entering their cars to go racing. Empty seats were everywhere and huge chunks of the stands sat empty. The “official” estimate was 120,000, but common sense told most people that it was closer to 90,000 fans in the stands. That had to be disappointing for the track and the drivers, but what was the reason? Is it the economy, the reconfiguration of the track, or the price of gasoline? It’s probably all of the above plus something else.

Yes, the economy, though improving, is doing so slowly. Yes, people miss the old Bristol track where excitement happened on every lap. That doesn’t happen anymore unless you’re a racing purist, and let’s face it. Most fans, especially in the numbers that NASCAR attracted in the last three decades, are not racing purists. They want to see action, as in beating and banging. It just didn’t happen much, especially in the Sprint Cup race. And yes, the price of gasoline on the trip down ranged anywhere from $3.75 – $3.45 per gallon. But that’s less than the prices of a few years ago.

I think in addition to the reasons mentioned earlier, it’s also the hype and what the economy has done to corporate sponsorship. Someone who might know told me this weekend that corporate sponsors usually took over 20% of the tickets (about 32,000) to give away to employees, customers, salespeople, and friends. That’s not happening these days. Another reason is the constant advertising on what a knock-down, drag-out race the Jeff Byrd 500 was going to be. Ever since the track was resurfaced, it hasn’t been that kind of race. It reminds most fans of a smaller Charlotte Motor Speedway. Giving the drivers another lane to race in was a popular idea…with the drivers, NASCAR and the media. It’s not so great with a lot of the fans who loyally came to Bristol in huge numbers for years to see beating and banging, but there’s another angle that is confusing.

It doesn’t cost anything (except maybe your cable bill) to watch the race on television. Folks stayed away on Sunday. Several theories have been brought forth, and they go anywhere from the sunny day, the beginning of spring (both of which could lead to outside activities), and even the fact that Kyle Busch dominates races at Bristol these days. Whatever the reason, viewership was down 7% in early reporting. That’s a bunch for what many call “The Bristol Race.” Maybe by August, the economy will improve, gas prices will drop, and drivers will start using the “chrome horn” again because they can. Maybe corporate sponsorship will return, but I doubt they’ll be changing the track back to what it was before progressive banking was installed in the high-banked turns. The new Bristol is different, and we might as well get used to it. Besides, this Bristol is much better than no Bristol at all!

Strange as this may sound, there was lots of action at Bristol this weekend, but most of it was not during the race (which is an unfair assessment—there was some good racing in both the Nationwide and Cup Series races).

Goodyear decided the tire they brought to Bristol was simply not going to work, so they did something that was both heralded as brilliant and stupid in one stroke. After all the teams had practiced and qualified on the new tire, Goodyear decided to use the right sides from last year, essentially negating all the practice times teams had logged in. Since the tire company had to mount a lot of tires, teams were only given one set to use in practice on Saturday. The result threw several teams for a loop. Pole-sitter Carl Edwards didn’t find the right setup until the last 50 laps of Sunday’s race, and he finished second. Kudos should go to Goodyear, however, for correcting what might have been a bad situation if tire failures continued.

Jennifer Jo Cobb didn’t start Saturday’s Nationwide Series race after a disagreement with her car owner. Both sides disagree on what happened, so we’ll leave it at that. Car owner Rick Russell said that starting and parking was in the plans all along. Cobb said that she first heard about it 10 minutes before the race. The result was Cobb refused to drive the car, saying that she had a commitment to her sponsors, NASCAR, and her fans to not start and park. Watching the drama as the race started with Cobb’s shiny red Mustang parked in the infield at the start of the front stretch pits was drama at its best. Apparently Cobb no longer drives for Russell’s team. Stay tuned.

Finally, in on-track news, Brad Keselowski got the ire of Jeff Gordon on Sunday. Keselowski had problems early in the race that took him out of contention. He got back on the track and was trying to have a good finish. Jeff Gordon had fallen back from his top-10 starting position, but was at the edge of the top 10 when trying to pass Keselowski, who was three laps down. Then, while Gordon was attempting his pass, Keselowski “door-slammed” Gordon, making his march to front short-lived. “I’ll just tell Brad that the next time I’m three laps down, and he’s on the lead lap, just expect the same out of me, you know?,” Gordon said. Keselowski finished 18th, and Gordon finished 14th.

Ron Fleshmanhttp://www.ris-news.com
Ron Fleshman has followed NASCAR racing since attending his first race at Martinsville Speedway in 1964. He joined the Motor Sports Forum on the CompuServe network in the 1980s and became a reporter for Racing Information Systems in 1994. In 2002, he was named NASCAR Editor for RIS when it appeared on the World Wide Web as www.motorsportsforum.com. He can now be found at www.ris-news.com. Ron is a member of the American Auto Racing Writers and Broadcasters Association. You can find Ron following and reporting on the top three NASCAR divisions each week. As a lifer in his support of racing, he attends and reports on nearly 30 events a year and as a member of the motor sports media, his passion has been racing for 47 years. He lives with his family in rural West Virginia and works in the insurance industry when not on the road to another track.
Previous articleNASCAR Drivers Allmendinger and Mears to compete in Sprint Bragging Rights Challenge
Next articleThe Last Word on Bristol, as Kyle W(inner) Busch again sweeps Tennessee