As NASCAR Heads to California… 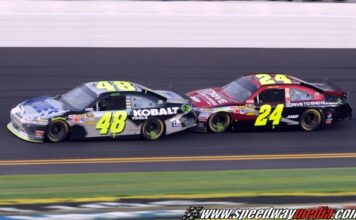 I’ll be short this time. The NASCAR Sprint Cup and Nationwide Series teams are headed to Fontana, California and Auto Club Speedway, and while the folks who cover NASCAR continue to try to brainwash us into thinking that we’re just going to love the race on Sunday, it’s woefully obvious that we’re going to see a race that disappoints us. Why? Because it’s California, that’s why. Despite the rave reviews I’ve heard this week about how much the fans are just prejudiced against this track, the truth is that they have good reason for their prejudice. It hasn’t been a show to remember ever. Let’s hope that things change this week. [/media-credit]And one more thing about Fontana. Who in the wide, wide world of sports decided it was a good thing to go out to Phoenix and Las Vegas, take a week off, run Bristol and head back to California? It boggles my mind. The week off makes more sense if you run at Fontana and come back to Bristol due to weather considerations. The schedule makers get a bye because last weekend was so wonderful and this weekend is going to be cold. Luck, I guess, but the travel costs for teams are not a laughing matter.

I am amazed at the continuing saga of Rick Russell’s 2nd Chance Motorsports and driver Jennifer Jo Cobb’s disputes. Today, Russell filed a complaint against Cobb saying she was guilty of larceny for stealing parts. If I read the comments right, Cobb says that the parts were moved to a storage building on Russell’s property and the storage facility belonged to Russell. What? Sounds like the way things are going all over America. Everyone wants to sue once there is a disagreement and if a suit is not possible, you either take it to the press or call the law. Even more amazing is that Russell and Cobb had a contract that required her to repair the car if it was damaged in a race, which happened at Las Vegas. Furthermore, she was required to supply engines for the car. I guess Jennifer Jo really wanted to race so much she entered into a really lousy contract. This can be best described as a mess.

I noted with interest that TRG Motorsports is changing to Ford bodies and power after California. It’s a limited agreement with Roush Fenway Racing to build the cars and with Roush-Yates Engines to supply powerplants. I wonder if this is a trend. We’ve seen Richard Petty Motorsports move from Dodge to a similar agreement with RFR last year. The same thing happened with Front Row Motorsports and now with TRG. Ford has now increased their number of cars from five in 2008 to nine in 2011, and if rumors are to be believed, there could be more. It’s very interesting, to say the least.

Finally, all I’ve heard this week is how Jimmie Johnson is a lock to win at Auto Club Speedway. And if not him, it has to be Jeff Gordon. I might agree if it weren’t for a couple of guys who have performed much better and have a record at Fontana, namely Carl Edwards and Matt Kenseth, not to mention Kevin Harvick. No one promotes “Five-Time” and Gordon more than the fine folks, who cover the sport, but here’s my shocking prediction—it might be Kyle Busch, much to the chagrin of NASCAR Nation. But, then again, who knows? I just know that we’ll know late on Sunday evening. But the constant presumption that the favorite always has to be one of the Hendrick teams is interesting. It ignores recent performances. But what do I know?

Ron Fleshmanhttp://www.ris-news.com
Ron Fleshman has followed NASCAR racing since attending his first race at Martinsville Speedway in 1964. He joined the Motor Sports Forum on the CompuServe network in the 1980s and became a reporter for Racing Information Systems in 1994. In 2002, he was named NASCAR Editor for RIS when it appeared on the World Wide Web as www.motorsportsforum.com. He can now be found at www.ris-news.com. Ron is a member of the American Auto Racing Writers and Broadcasters Association. You can find Ron following and reporting on the top three NASCAR divisions each week. As a lifer in his support of racing, he attends and reports on nearly 30 events a year and as a member of the motor sports media, his passion has been racing for 47 years. He lives with his family in rural West Virginia and works in the insurance industry when not on the road to another track.
Previous article
AMERICAN IDOL STAR DAVID ARCHULETA TO PERFORM THE NATIONAL ANTHEM AT AUTO CLUB SPEEDWAY’S ROYAL PURPLE 300
Next article
Sean Corr Kicks Off Busy Week With Appearance In New York; Pumped About ‘Dega