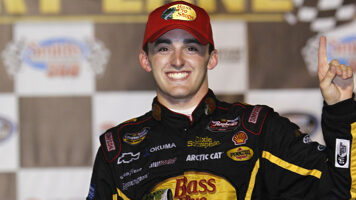 Austin Dillon has already made a name for himself in the Camping World Truck Series, though is now looking to make his move up the ranks. Dillon announced yesterday at Auto Club Speedway that he would make his debut later this year in the No. 98 car owned by Mike Curb.

Dillon will have sponsorship support from The Ronald Reagan Presidential Foundation’s Centennial Celebration and the Childress Institute for Pediatric Trauma.

“It’s an honor and a privilege to be part of the Ronald Reagan Centennial Celebration as a Co-Chair of the National Youth Leadership Committee,” said Dillon. “President Reagan was always one of my grandfather’s, Richard Childress, heroes, so I grew up hearing about the President’s strong leadership abilities and family values. Those are two qualities I carry with me in my career as a NASCAR driver by being a strong leader for my team and making my family proud of my accomplishments on and off the track.”

The Ronald Reagan Centennial is a year long celebration of the 100th birthday of the 40th President of the United States of America. A series of events, partnerships and initiatives sponsored by the Foundation are planned to happen throughout this year. Regan was the first president to attend a race as in 1984, he gave the command to start motors for the Firecracker 400 at Daytona and on that day, Richard Petty won his 200th race.

“President Reagan was the first sitting U.S. President to attend a NASCAR race,” said Stewart McLaurin, Executive Director of the Ronald Reagan Presidential Foundation Centennial Celebration. “As many Americans take a moment this year to remember the life, lessons, and legacy of President Reagan in their own way, we are grateful for this partnership and we are honored by the leadership Austin will bring to the national youth leadership council.”

Last year, Dillon earned seven poles in the Camping World Truck Series, breaking a 12-year-old rookie record. He also captured his first career victory at Iowa, followed by a win at Las Vegas, on his way to winning Rookie of the Year and finishing fifth in the standings.

The decision has yet to be made whether the first start will come at Kansas or Phoenix, but Dillon is comfortable either way.

“Those are the two races that I feel like I have some experience [at the tracks], and we can go race with these guys and we can run up there and compete with them,” Austin Dillon said. “We want to go to a place where we want to be on a level playing field.

“Phoenix, they’re doing the new pavement, might be the place or Kansas, where I have some laps at. It is going to be a learning experience.”

When Dillon makes his Cup start for Mike Curb, it’ll mark the 100th start for Curb. Curb has a connection with Dillon’s grandfather Richard Childress, as he reunited Childress back with Earnhardt in the mid-1980s.

“I am proud to be associated with Richard Childress and Austin Dillon as he makes his first Sprint Cup start,” said Curb. “I am proud that my company Curb Records is also involved in this wonderful tribute to President Reagan’s 100th Centennial Celebration. I had the opportunity to serve President Ronald Reagan in several capacities including Co-Chairman of his successful 1980 Presidential campaign.  I also want to thank our partners at FullCircle Ventures for putting this program together.”

“This is such an opportunity with the Reagan opportunity, we couldn’t turn it down,” Childress said. “You never know if you’re ready until you do it. He’s got some good experience at some of the tracks, and we’re going to just try him a race and see how it goes.”