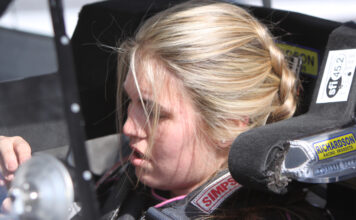 [/media-credit]Up and coming NASCAR racers like Chase Elliott, Johanna Long and Dakoda Armstrong may have loads of talent but they also have one other thing in common, the love and support of their family. And each one of them has proven that racing is truly a family affair.

Thanks to the coaching of his NASCAR champion father Awesome Bill Elliott and the unfailing support of mom Cindy, Chase Elliott is already proving that racing for him is filled with family. The young racer also recently signed with one of NASCAR’s most famous team families, Hendrick Motorsports.

Elliott raced this past weekend at Greenville Pickens Speedway in one of NASCAR’s developmental series under the banner of HMS. With that start, Chase officially became the youngest driver ever to start a K&N Pro Series East race at the tender age of 15 years.

Elliott followed in his most popular father’s footsteps from the moment he pulled into the historic race track in South Carolina. Fans lined up well into Turn Four to get the youngster’s autograph and the line remained until the session finally had to be ended so the race could start.

Elliott, in his No. 9 HendrickCars.com Chevrolet, qualified for the Kevin Whitaker Chevrolet 150 in the 26th position. His qualifying lap, at a speed of 85.531 miles per hour, was a definite improvement over his practice time but he still started the race deep within the field.

Elliott had to not only pick his way through the field gradually but also had to overcome a spin on lap 97 to soldier forward. With 23 laps to go, the young driver, with his father in his ear as spotter, manhandled his way to eighth, eventually finishing the race in the fourth spot.

Ever the competitor, just like his father, Chase Elliott had this to say after his debut.

“The weekend wasn’t quite what we wanted it to be,” Elliott said. “But it ended up being a pretty good night for the HendrickCars.com Chevrolet.”

Just as family has been critical to Chase Elliott’s rise in the sport, so has the family of Johanna Long been instrumental in her move up as a rookie in the Camping World Truck Series this year. She too is following in the steps of her racing father, Donald, who raced in the NASCAR All-Pro Division back in the day.

Long, at age 18, admits that she is struggling a bit to get that handle on her No. 20 Panhandle Grading and Paving Toyota Tundra truck. In the first three Truck races, she has finished 32nd, 20th and 31st respectively.

“It’s going,” Long said of her Truck run to date. “We’ve had a lot of bad luck but every time we go to the race track we’ve been learning a lot.”

Long was very excited to race this past weekend at Martinsville in the Kroger 250 this past weekend. She was able to harness her excitement to get her best finish to date, bringing her truck to the finish line in one piece and in the 18th position.

But she still goes back to crediting her family for putting her in the position to pursue her racing dreams.

“My mom and my dad and my grandparents and my uncle, they all own my team,” Long said. “They are a big part of my career.”

“They have given me a great opportunity and I can’t thank them enough,” Long continued. “My mom and dad come to every single race and they would not miss it for the world. It’s really neat for them to come and experience this with me.”

At age 19, Dakoda Armstrong may be the eldest of this group of up and coming racers, but he too got to where he is today thanks to the nurturing of his family, in his case from down on the farm. Thanks to his family’s support, Armstrong recently signed with ThorSport Racing to run a third team to current powerhouse Truck racers Johnny Sauter and Matt Crafton.

Armstrong will run the No. 98 Chevy Silverado for a select number of races this year. Armstrong will also continue his ARCA racing, where last year he won the Rookie of the Year honors.

Armstrong credits his family with jump starting his racing career. He grew up on a farm in the Midwest, born in New Castle, Indiana.

“When I was younger, we had cattle and we actually had to sell them so we could go racing,” Armstrong said.

The investment paid off and this racer’s family farming avocation has even led him to several sponsorship deals, specifically with ethanol coming into the sport and the greening of NASCAR.

“It’s kind of funny how it worked out,” Armstrong said. “My dad’s farming career and my racing career are starting to mesh right now.”

“It’s been really neat and it’s a great experience for my family,” Armstrong said of his racing. “They really love it.”

Regardless of their ages or current racing series, there is no doubt that all three of these up and coming NASCAR future stars have succeeded in moving forward in their young careers thanks to the love, support and nurturing of their families.

And there is also no doubt that the parents, grandparents, aunts, and uncles of Chase Elliott, Johanna Long and Dakoda Armstrong could not be more proud.