Martinsville May Be the New Bristol 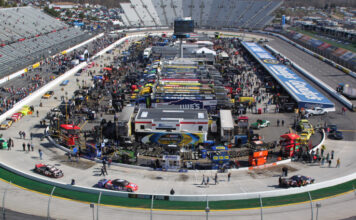 [/media-credit]Martinsville is the new Bristol. Why? I could see it on the fans’ faces. Two weeks ago, a very low crowd came to Bristol to see some short track racing and what did they get? Racing that just wasn’t Bristol. Apparently, the word has gotten around that Bristol no longer offers the short track “rubbing is racing” experience that fans crave. So the fans stayed away. The 160,000+ seat stadium crowd was about half that. Enter Martinsville Speedway.

Martinsville Speedway doesn’t offer the high speeds of Richmond and Bristol, but “the paper clip” offers lots of action and some of that “rubbing” that the fans seem to love. And boy did they get that on Sunday. The intimate venue gave us the best racing of 2011 complete with an exciting finish. The stands were nearly full (the official estimate was 60,000) and the fans were enthusiastic, especially when Dale Earnhardt, Jr. took the lead late in the race. Old Junior even moved Kyle Busch out of the way with his bumper to make the pass. The crowd loved it. And they could clearly see it because there isn’t a bad seat in the house.

At nearly the halfway mark, the bad crash that involved Martin Truex, Jr. and Kasey Kahne caused the race to be red-flagged. It was such a beautiful day that I ventured outside the friendly confines of the press box and into the concourse and the grassy area on the backstretch. My son, attending his first race at Martinsville, something my father and I did long ago, was sitting there and he made the most prolific statement of the day. “Dad,” he said, “this is a lot better than Charlotte.” Indeed.

The race had it all. We saw close racing, a most popular driver finally lead a race, and action on every lap. Where else could you see this? Well, earlier you might have seen it at places like Bristol, but the popular thing to do is to configure tracks so that the drivers can race without touching. I’m here to tell you that the fans do not want that. They want what they saw on Sunday.

For whatever reason, Goodyear brought a tire that didn’t last very long and didn’t rubber up the track, leaving one groove for the drivers to go fast. That’s pretty much always been the case at Martinsville, but it was really extreme on Sunday. Double-file restarts were an exercise in futility. If you were on the outside, you were toast. So, if you wanted to go low, you had to do something to get there and that meant contact. The fans loved it. And for all the hand-wringing about the tires, they were hardly a concern during the race. It was as if the multitudes came to the mecca of short track racing to see just that since they can’t find it anywhere else.

Martinsville Speedway may very well become the favorite of short track fans in the future. Tickets prices are reasonable, the venue takes you back in time when racing came down to who could make the moves to get a win in a small space. And while the high dollar speculators built palaces for these gladiators of speed to perform in, Martinsville has stayed essentially the same. The new improvements were noticeable, but they didn’t take away from the charm of the track built in 1947—the oldest track on the Sprint Cup circuit. From the exhilaration on the talk shows to the comments of the people on the street, it seems this is what the fans want. I hope everyone in the NASCAR world is listening.

Ron Fleshmanhttp://www.ris-news.com
Ron Fleshman has followed NASCAR racing since attending his first race at Martinsville Speedway in 1964. He joined the Motor Sports Forum on the CompuServe network in the 1980s and became a reporter for Racing Information Systems in 1994. In 2002, he was named NASCAR Editor for RIS when it appeared on the World Wide Web as www.motorsportsforum.com. He can now be found at www.ris-news.com. Ron is a member of the American Auto Racing Writers and Broadcasters Association. You can find Ron following and reporting on the top three NASCAR divisions each week. As a lifer in his support of racing, he attends and reports on nearly 30 events a year and as a member of the motor sports media, his passion has been racing for 47 years. He lives with his family in rural West Virginia and works in the insurance industry when not on the road to another track.
Previous articlePit Road Discussion: Jimmie Johnson, Kyle Busch and Timing Speeds
Next articleChase Elliott, Johanna Long and Dakoda Armstrong Prove Racing is a Family Affair