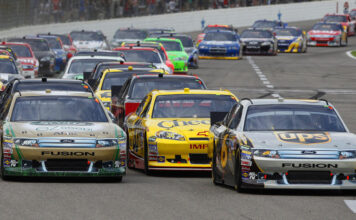 [/media-credit]1. Carl Edwards: Edwards took third at Texas, passing Tony Stewart’s gassed out car on the final lap, as Roush Fenway Racing placed all four cars in the top 7. Edwards battled stomach problems all day, as well as handling issues in the No. 99 Scott’s Ford, but hung in to post his fourth top-5 result of the year. He vaulted passed Kyle Busch in the point standings, and holds a nine point lead.

“We were loose all day,” Edwards said. “And when I say ‘we,’ I mean the car and me. It’s hard to find a rhythm when you’re constantly telling your car to ‘go’ and only your stomach is listening. It was a day of ‘fits and sharts.’ My teammate David Ragan may drive the UPS car, but it was me who truly found out what brown could do for me. The answer was very little.

“As you may know, I’m in the last year of my contract, and I’m currently in talks with Roush Fenway concerning a contract extension. I’m pretty confident we’ll get it done, especially after Saturday night’s performance, because I seriously doubt anyone else would want my ‘seat’ after that.”

2. Kyle Busch: Busch was running third and primed to contend for the win at Texas, but a left-rear tire vibration forced a late pit stop, putting the No. 18 Interstate Battery Toyota a lap down. Busch never got a caution to get back on the lead lap, and settled for a disappointing 16th, which knocked him from the Sprint Cup points lead. He trails Carl Edwards by nine points.

“Joe Gibbs Racing is still experiencing engine problems. Luckily, we’ve identified the issues—they’re apparently called ‘Denny Hamlin’ and ‘Logano.’ I think those two have answered the age-old question: ‘What happens when a driver and car run out of talent at the same time?’

3. Matt Kenseth: Kenseth ended a 76-race winless streak with an assertive victory in the Samsung Mobil 500 at Texas, leading 169 of 334 laps and winning by over eight seconds over Clint Bowyer. Kenseth donned the ceremonial ten-gallon hat and six shooters afforded the Texas winner in victory lane, celebrating his first win since California in 2009. He leapt six places in the Sprint Cup point standings to third, 13 behind Carl Edward and four behind Kyle Busch.

“Surprise!” Kenseth said. “It’s Matt Kenseth with the ‘hat trick,’ and not Kevin Harvick. And it’s not just Carl Edwards ‘shooting blanks;’ it’s me as well.

“I’ve always ran well at Texas, and I knew we were capable of winning here. I just had to go out and do it. Much in the same way that Edwards did, I told myself, ‘I’ve got to go.’ Luckily for me, and for Carl, I did, and he didn’t.”

“We’ve gone seven races this season without a win,” Johnson said. “I could be a whiner and blame everybody, which would be a case of a ‘critical ass’ calling out the ‘critical mass.’ But I’ve learned that criticism is a useless endeavor—it can only lead to forced, insincere apologies to NASCAR.

“But it is much too early in the season to be worrying about my deficiencies. I should know that better than anyone. I’ve made a habit of spending the first 26 races showing I’m mortal, and the last ten proving I’m immortal. I’ve spent five years perfecting the art, and it’s a cause I’m proud to champion.”

5. Kevin Harvick: Harvick’s effort to win his third-straight race was derailed early after a right-side tire violation penalty on his first pit stop. With track position compromised, he eventually fell two laps down and never returned to the lead lap, finishing 20th. He tumbled four places to ninth in the point standings, and trails Carl Edwards by 28.

“Unfortunately,” Harvick said, “I won’t be saying ‘three in a row.’ They say good things come in three’s, except for four-tire pit stops.”

6. Dale Earnhardt, Jr.: Earnhardt posted his second-straight top-10 finish, and fourth of the season, with a ninth in the Samsung Mobil 500. He moved up two places in the point standings to sixth, and trails Carl Edwards by 21.

“It’s now been 100 races since my last win,” Earnhardt said. “That’s a dry spell any member of Junior Nation could be proud of. But that’s a long time to go without a win. Now, when I see a ‘three-finger salute,’ I’ll know it means ‘three digits.’ Of course, that’s opposed to the normal ‘three-finger salute,’ in which three of my fans stand in unison and flip the bird to the driver that just passed me on the track.

7. Kurt Busch: Busch led five times for 50 laps at Texas, but found himself in an off-sequence pit situation without a much-needed caution. Forced to pit late while running second, Busch settled for a 10th, and fell one spot in the point standings to fifth, 16 out of first.

“We qualified 10th and finished 10th,” Busch said. “That’s what I call ‘running in place.’ And speaking of ‘running in place,’ the No. 22 Shell/Pennzoil Dodge team could use a ‘jog,’ preferably to the noggin, to rouse us from the doldrums of mediocrity. I’ve told my team the same thing I‘ve told my cosmetic surgeon: ‘You can do better than this.’”

8. Ryan Newman: Newman faced an uphill battle on Saturday night at Texas, as the No. 39 U.S. Army Chevy lacked the necessary handling and speed to be a factor in the Samsung Mobil 500. Newman salvaged a 14th-place result, scrapping until the end. He dropped one place in the point standings to seventh, 23 out of first.

“It was a tough day for Stewart-Haas Racing,” Newman said. “I struggled all day, and Tony Stewart ruined a potential race-winning fuel strategy by speeding in the pits on his final stop. So, I was ‘sorry,’ and Tony apologized. I’m sure Tony had a horrible feeling in his gut after that huge mistake. It seems that, much like Carl Edwards, Tony was suffering from his own case of ‘botch-ulism.’”

9. Clint Bowyer: Bowyer’s runner-up finish at Texas gave him three consecutive top-10’s after an early season of struggles, and solidified much-needed momentum for the No. 33 Richard Childress Racing Chevrolet team. Bowyer nearly wrecked while leading when contact with Brian Vickers sent him spinning, but a miraculous save kept him in the running.

“My sympathies go out to Carl Edwards,” Bowyer said. “I can certainly relate to the ordeal he experienced on Saturday, because I nearly crapped my pants too. If not for our abilities to avoid catastrophe, we both could have had a mess on our hands.”

10. Tony Stewart: Stewart’s shot at a Texas victory ended when a late pit road speeding penalty ruined what appeared to be a winning fuel strategy by the No. 14 Office Depot/Mobil 1 team. Stewart ran out of fuel on the final lap while running third, and finished 12th.

“In times like these,” Stewart said, “I must choose my words wisely. Criticizing NASCAR’s pit road speed monitoring system so soon after being penalized would be a case of bad timing. And explaining the use of sarcasm and puns right now would be a case of good timing. And you know me. If you believe overly embellished Rolling Stone accounts of my life as a playboy and hard partier, then I certainly know everything possible about ‘good time-ing.’”