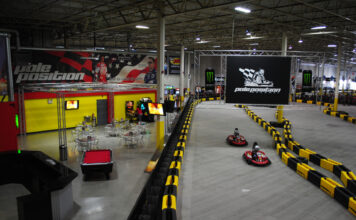 Gary BuchananFor years, NASCAR has been trying to site a track in the New York, New Jersey, Connecticut metro area without success.
But there finally is a race track in the area, although it might not be exactly what the NASCAR had in mind.

Pole Position, an indoor karting track, recently opened in Jersey City, New Jersey, bringing racing of at least some sort to one of the country’s biggest markets. While a ‘road course’ for electric open wheel go karts, Pole Position is chock full of NASCAR references.

For example, a giant picture of Trevor Bayne celebrating his Daytona 500 victory is displayed on the outside of the massive racing facility. Bayne was one of the first guests at the facility introducing it to the world by racing Robin Roberts on ‘Good Morning America.’

Another NASCAR past champion Kurt Busch is also involved with the Pole Position brand nationally. In fact, Pole Position’s Co-Owner Eyal Farage advised that Busch was the witness during the signing of their franchise paperwork that paved the way for the Jersey City track location.

Another NASCAR tie-in comes when every Pole Position customer watches the safety video in preparation for their race. Jamie Little, NASCAR pit reporter for ESPN and racer herself, stars in the video and is also an investor in the national Pole Position brand.

The 80,000 square foot facility, featuring two quarter-mile tracks, is also filled with racing gear from all over the world.

While Pole Position may not be a NASCAR-sanctioned track, its owners take as much pride in their track as America’s fastest growing sport does when it comes to the grip of their racing surface and safety for all involved. They even have professional mechanics and trained pit crews on board to make sure that every race car runs to perfection.

“We bit blast the cement on our race track,” Davis-Farage said. “The traction optimizes the driving experience itself so it’s as realistic as possible.  We do everything we can to create the best racing experience.”

“We have multiple jobs in the pits and they work together just like a race pit crew,” Ayal Farage said. “We have a maintenance program that is very important to us. We stay on top of that.”

“We want to give the racers the best experience in their vehicles,” Farage continued. “We are ‘built for racers by racers,’ which just happens to be the Pole Position motto.”

While the co-owners of Pole Position want everyone to have fun at their facility, whether it is for an ‘arrive and drive’ event, a charity event, or a league competition, there are definitely rules to be enforced. In fact, the Farages have their own version of the NASCAR hauler.

“They get one warning,” Davis-Farage said of anyone breaking the rules of engagement and safety. “And then they get taken out.”

While NASCAR racing may not have been in their blood, for Karen and Eyal Farage, as well as their family, opening Pole Position Raceway has been the culmination of the most important race that they have been running, that of surviving this tough economy.

“I was in the software industry for 30 years and I was the member of the executive team that lost my job,” Karen-Davis Farage said. “In the meantime with the recession in full swing Ayal, who was a contractor for thirty years, was also feeling it.”

“Ayal has an old antique Porsche and always had a dream to drive cross country with his first born before sending him off to college,” Davis-Farage continued. “He did so with our son Andrew and when they got to Las Angeles the last thing they did before delivering my son to the dorm was to go indoor electric karting.”

“And I was hooked,” Ayal said simply.

“Andrew got out of his kart and said to Ayal, ‘Daddy this is what you should do for the rest of your life,’ Davis-Farage continued. “I said you’ve got to be kidding. But I saw the passion and excitement and I said to him ‘If you’re going to go down this road, we’re going to do this together, with a template for success.”

So, indeed the couple as well as their children have sunk everything they have into making their new race track in Jersey City a success. They have already seen their customer base, from those who love racing to those who have never set foot in a race car, blossom and grow.

“We have an opportunity to provide and sell racing fun,” Davis-Farage said. “Racing is the biggest sport in the country and because of the technology, providing it indoor, year-round in a safe environment really makes sense.”

Perhaps the racers, however, sum up the Pole Position experience best. Gilbert Williams, an admitted racing junkie who has visited the race track at least five or six times to date, said that he comes to the track for the excitement, the competition, and to satisfy his ‘need for speed.’

“I’ve been a NASCAR fan for a long time, since I was a young fellow, I’m talking Neil Bonnett and Cale Yarborough days,” Williams said. “My driver now sentimentally is Dale Junior because Earnhardt was my favorite.”

“But this is totally exciting,” Williams continued. “It gives you a different feel in a car, two or three inches off the ground, doing 30 or 40 miles per hour.”

“It’s great,” Williams said. “It gives me a deep appreciation for what the NASCAR drivers go through. I like road courses and I’m looking at it now in a totally different light.”

Pole Position Raceway is located at 99 Caven Point Road in Jersey City. For more information, visit the website at www.polepositionraceway.com/new-york-jersey-city.