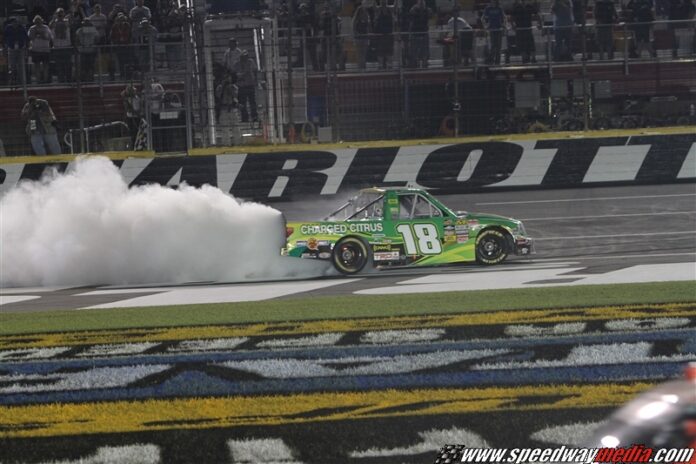 Kyle ‘Rowdy’ Busch claimed the checkers in his 28th career Camping World Truck Series Race. Busch, led the last seven laps in Friday’s North Carolina Education Lottery 200 at Charlotte Motor Speedway. He joins driving legends Mike Skinner and Jack Sprague in second place on the all-time truck series win list. However, for Busch, the numbers do not stop there. He brings his NASCAR career total to 97 wins. This monumental number puts Busch in the elite company of Dale Earnhardt and Darrell Waltrip, and tied for third in NASCAR wins.

The race win did not come easy for the defending race winner. Busch spun early, but used his talent to keep the No. 18 green NOS Tundra off the wall, losing only a few positions on the racetrack.

Kyle Busch Motorsports in conjunction with Speedway Children’s Charities raced in remembrance of 10-year-old Zahra Baker, who was tragically murdered last September. A photo of Baker adorned the passenger side window of Busch’s No. 18 truck. Following his win, Busch dedicated his win to her memory.

The Charlotte Motor Speedway was not kind to the Camping World Truck Series Drivers. Point’s leader Matt Crafton was collected in an early caution involving Max Papis and Brendan Gaughan. Crafton’s misfortune opened the door for rookie Cole Whitt to lead the point standings as the trucks leave Charlotte and head to Kansas in two weeks.

Defending champion Todd Bodine and veteran wheeler Ron Hornaday were both victims of cautions during the race. The field collectively brought out 10 caution flags.

Polesitter Timothy Peters, No. 17 GearWrench Red Horse Racing Toyota claimed the pole for Friday’s race, in his 100th career start. However, his night came to a quick end after his machine struck the outside wall.

“I really want him to have success,” Dale Earnhardt Jr. said of Raikkonen’s debut. “I hope that he runs well and enjoys his experience. I like to see people come in and get opportunities. I like to really see people that come in and have never seen our sport, heard about it and maybe heard good and bad things come in here and leave with a great impressions,” Earnhardt continued. “That makes me feel proud of being a part of it for as long as I have. I think that he will get a good impression. I think he’ll enjoy what he is going to get himself into.”

Raikkonen qualified in the 31st starting position and finished his evening in the 15th finishing spot.

“Expectations for Kimi (Raikkonen) tonight are pretty simple,” said car owner Kyle Busch. “Just try to get him to run all the laps, try to get him to gain some experience, get out there with some other trucks, try to drive the truck a little harder, and get a feel for it.”

The opportunity to have Raikkonen drive for Kyle Busch Motorsports came about after his agent contacted the team. The discussions were quick and Charlotte was the track of choice. This is just preliminary and there are not indications that Raikkonen will move to a Nationwide team anytime soon.