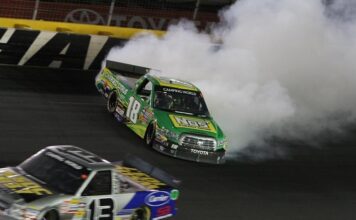 [/media-credit]When there’s a NASCAR Camping World Truck Series event, you always have to watch for Kyle Busch as he will be in the thick of the action. Tonight was no exception, as despite spinning out on lap 52, Busch won the race.  It was his fourth win this year in seven truck races and 28th truck win the year.

“I had an angel riding with me with Zarah Baker,” Busch said. “I didn’t have the truck to beat there at the end, Clint was strong, but we were able to do it. I’m not going to lie but its odd how things work out”

“We spun out; we only lost 3 or 4 spots. We came to pit road, got four tires. Eric made some changes and got me something that was a lot better …more drivable. I was able to drive back up there.”

Meanwhile, it was Clint Bowyer who finished second after leading the final laps before passed by Busch with seven to go.

“Yeah, it was just too loose,” Bowyer said. “Its unfortunate. You know, you draft so big there and he just got by me. I tried to get back to him. They deserved to win today, but I didn’t give it to them.”

Rookie Cole Whitt finished third to take over the points lead, one point over Johnny Sauter.

“Our team has just been so constant each week,” Whitt said. “The Cup guys have always been strong. We’ve just been consistent, beating the guys that we need to beat. It feels pretty good to run third to those guys and do well. We’re just going to keep racing like we are, go for wins and do what we can.”

James Buescher came home fourth after changing a battery with 65 to go, while Ron Hornaday came home fifth after spinning on lap 22.

After the race, Hornaday had a heated discussion with Johnny Sauter, who came home sixth, due to contact that happened near the end of the event.

“He told me it was a good race, I guess,” Hornaday said. “He told me I blocked him, but he didn’t know that I was three-wide. The truck got loose there and we got three-wide and he booted me there.”

“Just close racing there and I had a run and you just can’t stop there,” Sauter said. “It hurt our night pretty good as it put a pretty big gouge in the front of the truck.”

Kimi Raikkonen, making his first ever NASCAR start, would finish the night in 15th.

The night saw a record-tying 10 cautions as a lot of trucks were loose all night long causing single truck and multiple truck incidents.

The action started right away as on lap 10, Todd Bodine spun and made contact with the inside wall on the backstretch. Hornaday was the next to spin on lap 22 and then on the restart, Miguel Paludo had an engine let go. Then the winner, Busch spun on lap 52, followed by Timothy Peters getting in the wall on lap 63  while trying to pass Sauter.

Just past halfway with 65 laps to go, Brendan Gaughan got into the wall and behind him, Jamie Dick and TJ Bell made contact trying to avoid. Gaughan would be apart of the next wreck with 59 to go as  he was slowing down, Max Papis would cut across the nose of Matt Crafton, taking them all out. With a wounded truck, Dick would find the wall, both with 49 to go and 39 to go. The last caution came out with 28 to go when David Starr got into the wall and cut a tire.