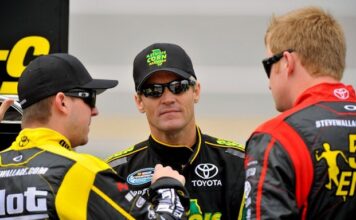 [/media-credit]“Well, I’ll tell you the whole deal,” Wallace, driver of the No. 66 5-Hour Energy Toyota, said.”We thought we were going to start the year pretty good.”

“We got a new teammate this year and built a bunch of new race cars,” Wallace continued. “We thought we were going to be really fast and felt like we had a pretty good idea going into this year.”

“But as it turned out we didn’t,” Wallace said. “And we really, really struggled early there in the year.”

Wallace’s teammate Michael Annett, driver of the No. 62 Pilot Flying J Toyota, could not agree more with the assessment of their early going this season.

“We went into the season doing a ton of stuff thinking we had the best thing we could bring to the track,” Annett said. “And then we unloaded and realized we had a lot of work to do.”

Both drivers and teams went back to the drawing board and after multiple meetings and changing up some personnel, they hit on another idea. They signed up one of the Cup drivers, David Reutimann, to help them shake out the problems on their team.

“We went to Nashville and we ran a third car with David Reutimann,” Wallace said. “He had a completely, way different, odd-ball set up and it ran really, really good.”

“He ran good and I struggled so we went back to the shop and we mended all the set ups and ever since then our cars have unloaded a lot better,” Wallace continued. “We’re still not where we need to be but we’re definitely going in the right direction.”

“We’re getting better and better,” Wallace said. “It’s exciting knowing that we’re not so lost as we were before.”

“There is light at the end of the tunnel.”

Annett used almost identical language regarding the difference the third car of Reutimann has made for both he and his teammate.

“We started having our Monday morning meetings and we made a list of what we needed to do,” Annett said. “We did all on the list and moved some people around and added the third car.”

“All the hard work is paying off and we can see the light at the end of the tunnel,” Annett said. “For awhile there at the beginning of the season, it was a small light but we knew we had the people, the parts and the cars to get the job done.”

“We are getting closer and closer to the end of that tunnel and everything’s finally moving in the right direction.”

While both Rusty Wallace Racing teammates did not have the best of days at last weekend’s race at Dover’s Monster Mile, with Wallace wrecking hard at the end and Annett never quite finding the handling on his car, the duo managed to salvage top-20 finishes when all was said and done.

Both now go to the track designed by their team owner Rusty Wallace, Iowa Speedway, for this weekend’s stand alone Nationwide race. Again, Annett and Wallace agreed that the John Deere Dealers 250 presented by Pioneer might just be their best chance to head to the winner’s circle.

“I have a big bull’s eye on Iowa,” Wallace said. “That’s my favorite track,”

“We had a really good shot there to win last year and had a problem in the pits,” Wallace continued. “We’re taking a brand new car, our best most state of the art piece.”

Interestingly, Wallace will be running for the first time ever the chassis matching his car number, RWR-066, this weekend in Iowa.

“It’s lighter and better and it’s been in the wind tunnel,” Wallace said.” That’s going to be a good deal.”

For teammate Annett, Iowa Speedway is coming home. The Des Moines, Iowa native has already scored an 11th and 7th place finish in 2009 and 2010 respectively at his home track.

“I take a lot of pride in my home track,” Annett said. “With the race just down the road from where I grew up, it’s a fun weekend.”

The teammates are convinced that the Nationwide race, with only two Cup drivers competing, is also the best chance for a Nationwide-only driver to take the checkered flag. And both are motivated by that opportunity to have that Cinderella finish.

“It drives me 100% to be the first Nationwide driver to get a win,” Wallace said. “It makes you feel really good when you can run up front with those guys. That’s what I’m excited about.”

“Trevor Bayne winning that race was amazing because he’s such a young kid and a Nationwide guy,” Annett said. “But Regan Smith winning at Darlington is really something.”

“Steven and I were talking about it and we agreed,” Annett said. “Him winning that race shows that if you do your job right, you can get the job done.”

With both Annett and Wallace headed into a track that means so much to the team owner and father respectively, one question that many have asked is if the two feel any added pressure.

“I get that question a lot,” Wallace said. “Iowa’s a cool track, but not just because my Dad’s involved with it.”

“As far as I’m concerned, we can’t let any of that change the way we approach the weekend at all,” Wallace continued. “We still have to keep our focus on the race.”

“We’ve had a real chance to win there the last two years in a row,” Wallace said. “Hopefully we’ll be able to put our team in Victory Lane and win one for the Nationwide guys.”