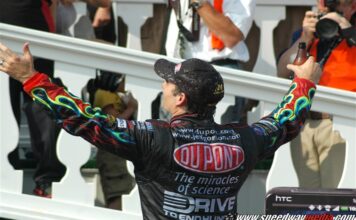 [/media-credit]Jeff Gordon, sporting the familiar No. 24 Dupont Chevrolet colors, scored his second win of the 2011 season, moving ever closer to Chase contention. This is Gordon’s fifth top-10 finish in 2011 and his fifth victory in 37 races at Pocono Raceway.

Gordon also reached another significant milestone with his win in the 5-Hour Energy 500. The victory ties Gordon with Bobby Allison and Darrell Waltrip for third on the all-time NASCAR Sprint Cup Series win list.

“It certainly helps us,” Gordon said of his Chase chances. “Our focus has to be the same all the time, try to win races, to lock ourselves in.”

“I’m just more excited about the momentum coming toward us,” Gordon continued. “The things that we believe in are starting to come true.”

“You question that at times,” Gordon said. “Days like today show how serious we are. At this point in the season, to get our program turned around, the timing couldn’t be better and hopefully we can keep that going.”

“This is a tough place to win.”

Gordon’s crew chief, Alan Gustafson, could not agree more with his driver.

“There are a lot of things at a track like this that are so difficult,” Gustafson said. “We were a little nervous. To win in this sport, you have to have everything on the edge.”

“It was a great, hard fought battle for us on the No. 22 car today,” pole sitter and second place finisher Kurt Busch. “It was a nice, steady run and we were able to have smooth pit stops and we had a great handling car.”

“It was a great genuine day for our team to run in the top five all day,” Busch continued. “It’s pleasing to see that result.”

“I was giving it all I had and I just couldn’t quite close the gap.”

Busch admitted that there were many things to balance in the race, especially as he engaged in the heated battle with race winner Gordon.

“It was an interesting day with shifting,” Busch said. “We shifted quite a bit today and had to keep track of the temperatures and the revs on the engine and fuel mileage as well. There was a lot to balance inside the car today.”

Baby brother Kyle Busch, driver of the No. 18 M&Ms Toyota, was also pleased with his third place finish.

“For us, we had a long way to come from since we started deep in the field,” Busch said. “We worked our way towards the front steadily and methodically for most of the race.”

“We had good pit stops all day and the guys did a good job giving me the right adjustments,” Busch continued. “The restarts played in our favor and we passed a few cars there. That last restart is where we got most of our track position.”

“Kurt was so much faster than I was that last run of the race that it wasn’t going to do me much to hold him up,” Busch said “So, I tried to let him go and see if he couldn’t catch the 24 and make a race out of it.”

“We just tried to bring home a solid third.”

Unfortunately, Kyle Busch’s car failed post-race inspection due to a height issue, too high on the left. “Being a parent, it means more to experience that with them,” Gordon said of having daughter Ella in Victory Lane. His car is being transported back to NASCAR’s R&D center for a more-in-depth look.

In contrast to Gordon and the Busch boys, the point’s leader coming into the race, Carl Edwards had a miserable day. The driver of the No. 99 Kellogg/Cheez-It Ford finished 37th after he broke a valve in the engine.

Even with that bad finish, Edwards did, however, maintain the points lead with the narrowest of margins. He is now just six points ahead of Jimmie Johnson, who finished the race in the fourth spot.

In a somewhat bizarre turn of events, Edwards joined the broadcast booth to provide commentary while his team worked furiously on his car in the garage. He was able to turn one last lap to avoid the DNF.

“I was very careful not to overdrive,” Edwards said. “One of the valves got in an argument with something in the engine and lost.”

Kevin Harvick, driver of the No. 29 Okuma Chevrolet, had an eventful day but still managed to finish fifth in the 5-Hour Energy 500. Harvick survived problems early when his crew did not get all the fuel in and he then got off the sequence of pit stops.

Dale Earnhardt, Jr., in the No. 88 National Guard/AMP Energy Chevrolet, Juan Pablo Montoya, piloting the No. 42 Target Chevrolet, Matt Kenseth, driver of the No. 17 Affliction Clothing Live Fast Ford, Ryan Newman, behind the wheel of the of the Haas Automation Chevrolet, and Martin Truex, Jr., in his No. 56 NAPA Auto Parts Toyota, rounded out the top ten.