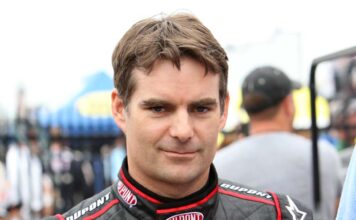 Jeff Gordon is headed to the Irish hills of Michigan to race this weekend fresh off his victory at Pocono Raceway, his second win for the season and his 84th win, tying Hall of Fame inductee Darrell Waltrip and Hall of Famer Bobby Allison. [/media-credit]Gordon’s success is also carrying over off the track as his partnership with the AARP Foundation is making a real difference in ending senior hunger. The AARP Foundation has partnered with Gordon for 22 races as a primary sponsor this season to call attention to the issue of the elderly who often have to choose between buying groceries or filling their prescriptions.

“It came about organically,” Anisa Tootla, AARP Foundation’s Vice President for Hunger Programs, said of the Jeff Gordon/AARP Foundation partnership. “It started with a conversation at a race track. The AARP Foundation and Hendrick Motorsports found each other at the right time.”

“We know that NASCAR fans are some of the most charitable, community-minded sports fans in the country and they have a track record of commitment,” Tootla continued. “We also know that Jeff Gordon is one of the most philanthropic drivers in the circuit. It was the right fit at the right time.”

The AARP Foundation has taken on its first ever cause-related marketing initiative smack dab in the middle of America’s fastest growing sport. From their CEO Barry Rand to their Foundation staff in every state in the nation, all have been convinced that NASCAR, Jeff Gordon, and Hendrick Motorsports are the perfect partners to raise awareness of the issue of senior hunger.

“There is very little awareness of the issue of senior hunger,” Tootla said. “There are 51 million people who face the threat of hunger and over 6 million of them are over the age of 60 years.”

“Very few people are aware of this problem and it’s a growing problem with the aging of the population and the recession, which makes it worse,” Tootla continued. “This partnership is unique in that realm of bringing awareness to an issue that very few people know about.”

The AARP Foundation and Jeff Gordon have also gotten creative in the ways that they are working together in activating this unique sponsorship. Not only does Gordon pitch donating to the cause every time he is interviewed on the track, but his show car is traveling throughout the country, attracting crowds and raising funds as well as awareness.

“We’ve had a variety of events, food drives, and relationships with grocery stores,” Tootla said. “Part of our local activation has been a great combination of local businesses, food banks, our State organization and really driving the awareness, as well as raising funds and food for local organizations helping hungry seniors.”

“We also have made contributions to local food banks to feed hungry seniors,” Tootla continued. “The ISC tracks themselves have made food donations through the extra food at the end of the race weekend.”

Just as Jeff Gordon uses social media to keep in touch with his extensive fan base, the AARP Foundation and the Drive to End Hunger are also using the social media platform to connect Gordon’s fans to the cause.

“We’ve seen an uptick of friends and tweets and retweets with every passing week where Jeff races,” Tootla continued. “It’s a destination site not only for NASCAR fans but the broader population.”

“We’ve definitely seen a lot of interest and noticed the passion of the race fans,” Tootla said. “The number of responses that we get when Jeff is in the car is amazing.”

“When Jeff talks about hunger, it’s really a call to action and people respond,” Tootla continued. “He is certainly a huge draw.”

“We had an event in Kansas where he did a check presentation to a food bank and drew over a 1,000 people,” Tootla said. “He’s a wonderful spokesperson for the cause. It’s been a great partnership.”

The driver of the No. 24 Drive To End Hunger Chevrolet could not agree more.

“I really love the fact that since Daytona they’ve served over 2 million meals,” Gordon said. “In the first couple of months, you see the numbers start to go up and it seems like in the last couple of months, things have really taken off. I think it’s awesome.”

“You certainly hope that they are having success,” Gordon continued. “They are very new to the sport and what it takes to be a sponsor in this sport.”

“Sometimes you just hit the ground running and I feel like they’ve done a great job with that,” Gordon said. “Because of that, they’ve seen the results.”

“I feel like it’s a program that is only going to get stronger and better as they learn more about what it’s like being a part of this sport and what our fans are like.”

The AARP Foundation’s Drive to End Hunger and Jeff Gordon will be next rolling into the Irish hills of Michigan for this weekend’s racing activities. The AARP Foundation will be right there with him, presenting the Food Bank of South Central Michigan with $10,000 to help feed hungry seniors in the area.

“We have a long way to go to end senior hunger,” Tootla said. “Everyone can help in one way or another and every contribution at www.drivetoendhunger.org helps.”

“It’s been a joy working with Jeff and Hendrick Motorsports,” Tootla continued. “They are charitably minded, committed to the cause and committed to ending hunger. We couldn’t think of better partners.”