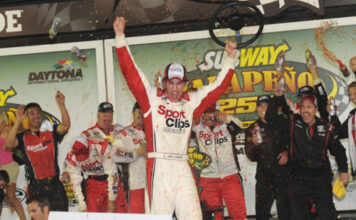 After spinning on lap 26, Joey Logano came back to through the field with a mass of different partners and hooked up with teammate Kyle Busch at the end to win the race. [/media-credit]”Man, its great to be on the other side of the fence,” Logano said in victory lane. “This is Daytona; I am totally pumped. Gotta thank Kyle for pushing. I could him calling 8 back, 6 back – I knew we had to go. Both spotters did good today.”

The win marks the first win for Logano at Daytona after pushing numerous drivers to wins.

“To win here at Daytona is the coolest win of my life,” Logano added. “For me personally, I really needed a win and that is going to help us.”

With a couple laps to go, Logano and Busch found a way around Elliott Sadler and Tony Stewart. They pulled out to a lead and then lost it near the end as Jason Leftler and Reed Sorenson caught them, but couldn’t get by. Leftler was credited with second, with Sorenson getting third and Busch in fourth.

The third-place finish for Sorenson allows him to extend his points to eight points over Sadler while winning the Nationwide Dash for Cash $1000 bonus.

Justin Allgaier finished fifth while a crashed happened as everybody was racing for sixth on back that began with contact between Mike Wallace and Danica Patrick in the middle of a three/four-wide battle.

Michael Annett was credited with sixth while Kenny Wallace slid through the grass to finish seventh. Sadler got eighth, followed by Aric Almirola and Patrick.

Making her 19th NASCAR start, Patrick led 13 laps and was up front all night before being collected in the wreck at the end.

“Got disconnected about half a lap to go and dropped back to get reconnected with Aric,” she said after scoring the third top 10 of her NASCAR career. “It looked like Mike was struggling there. I kept the car straight and my foot in it, probably not the right thing to do in a wreck.

“I learned a lot out there. I was glad I got to push a bit as I was thinking, ‘Am I only good as a leader?’.” But the guys did a good job on the Go Daddy Chevrolet.

Numerous drivers were involved in the wreck, including Steven Wallace who came to rest on pit road and was credited with 11th.

“It was just a tough day,” he said. “Me and Michael had a shot to win that race and the water temperature kept going up. The motor blew up and all hell broke loose on the front stretch. That’s just craziness at Daytona.”

A couple of different minor wrecks happened throughout the night involving a couple different drivers. One of the worst wrecks involved Eric McClure, who was transferred to Halifax Medical Centre for precautionary further evaluation.