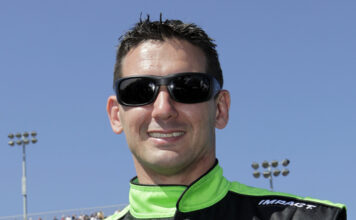 Andy Lally, rookie driver of the No. 71 TRG Motorsports Interstate Moving Services Ford, is making an interesting transition, from lone wolf without a dance partner at this past weekend’s Daytona race to Kentucky wannabe, having to qualify in on time for this weekend’s inaugural race. “This was just a cool little feather in the cap that a small team had come up here and done this,” Lally said. “That was pretty neat.”

Yet, in spite of the excellent starting position, Lally was quite the lone wolf, at least in the initial portion of the Coke Zero 400.

“Yes, I did feel like the ‘Lone Ranger’ a little bit, but it was fairly expected,” Lally said.

“I had spoken to Geoff Bodine before the race about hooking up and getting together,” Lally continued. “But we were starting in seventh and he was back in 35th or so, so it was going to be a little bit of time before we found him.”

“We just tried to hold on at the front as long as we could.”

Lally acknowledged that it was easier to hold on at the front more so when the race started and on the restarts when there was a bit of a pack. But that quickly changed when the tandem racers started the two-by-two pairings, causing Lally to struggle.

“It was kind of like the old days in the big packs until everybody gets hooked up and single file,” Lally said. “It wasn’t easy to hold on after that happened.”

“I was fighting tooth and nail to do whatever I could to stay in the draft and side draft guys,” Lally continued. “But it was definitely difficult to get off the gas and try to hook up with somebody.”

“This was my third restrictor plate race so I’ve seen the benefits of the hook up every time,” Lally said. “We struggled on our own for about 20 laps or so but once we hooked up with other cars, we were pretty decent and were able to move up through the field.”

Lally had particularly good luck when he teamed up with Terry Labonte, who was driving the No. 32 C&J Energy Ford. The Lally/Labonte tandem was so good together that they were able to push their way forward into the top ten at one point in the race.

“That was not planned,” Lally said of his liaison with Labonte. “That was almost forced by me.”

“Terry Labonte and Robby Gordon were running together and on the restart they got split up,” Lally continued. “Terry was on the bottom with a bunch of fast cars linked together. When I saw it, I moved to the bottom and drove up behind Terry, smashed him in the rear and started pushing him, whether he wanted me there or not.”

“I think Terry was a little hesitant at first but after the first few laps, we started going forward and passing cars,” Lally said. “So, then we got a message over the radio from his spotter that he liked the way I was going and he wanted to stay together.”

“We did that for the next 130 laps and we stayed together as best we could.”

The tandem did indeed stay together, that is until mayhem ensued at the end of the race during the two green, white, checkered attempts at a finish.

“Unfortunately, we weren’t in a position to really capitalize on that mayhem at the end of the race,” Lally said. “We had done a long green flag run but the pit stops weren’t what we needed and we lost the lead draft.”

“And then we went on a long green flag run and the pack pushed by us to put us a lap down,” Lally continued. “If all that havoc had happened one lap prior, we would have been in decent shape.”

“Once we took the white flag, we knew there was no more advancing of positions, so we just kind of backed off and tip toed through the minefield on the way to the checkered flag, passing battered car after battered car.”

After finishing 27th, Lally admitted he was ready to put the superspeedway in his lone wolf rear view mirror and head to the first-ever Cup race, the Quaker State 400, at Kentucky Speedway. At that track, he will not be alone as he was at Daytona.

“A bunch of these guys have done the Truck race or the Nationwide race but from the information I got from the guys who did the tire test, it was fairly similar to Kansas,” Lally continued. “So, I think everybody will unload with their Kansas set up and go from there.”

Lally is definitely a Kentucky wannabe as he currently sits 36th in owner points, just one position shy of being locked in.

“Right now getting in the show will be the biggest thing,” Lally said. “It’s going to be a big challenge.”

“We actually get a test day so we’ll get some laps on the track on Thursday,” Lally continued. “So, we’ll make some adjustments and see what we got for qualifying. We’ve got 48 cars for 43 spots so that’s a challenge.”

“You’re never not trying to go hard but we’ll do more mock qualifying runs and do more in qualifying trim than race trim,” Lally said. “So, we’ll see.”