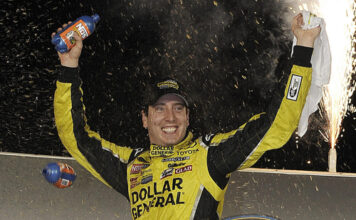 Kyle Busch held off Parker Kligerman on the final green-white-checkered restart and won Thursday nights NASCAR Camping World Truck Series (NCWTS) UNOH 225 at Kentucky Speedway. This was Busch’s fifth NCWTS this season and his 29th in this series. [/media-credit]“On the restart, when Jason White was on my inside, I figured if I could just get another good restart where I didn’t spin my tires, I’d be all right. Those guys spun their tires every time, and it kind of worked for us.” Busch said.

Despite finishing 24th after his truck broke its rear axle, series points leader Johnny Sauter extended his lead to 23 points over Cole Whitt.