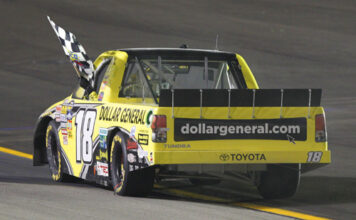 For Kentucky Speedway the UNOH 225 NASCAR Camping World Truck series race the kick off to the biggest weekend in the track’s history. The track joined a small group of NASCAR tracks that can boost of running all three of NASCAR’s top series on the same weekend and all night races at that. [/media-credit]To go along with the multi-series events, Kyle Busch began the weekend by winning the Truck series race. The win Thursday night marks his 5th win of the 2011 Truck series season and his 29th overall in the series,

But Busch had to work a bit harder for this win. On a day where he ran a 4 hr Cup practice, two Nationwide series practices and then winning the pole in Truck series qualifying, he showed up seconds late for the driver’s meeting. That slip up forced him to start the race from the back of the field.

It took Kyle 61 laps to finally work his way back to the number 1 position, but he remained up front for the rest of the night leading twice for a total of 61 laps, the most by a single driver. He faced late race challenges by Nelson Piquet, Johnny Sauter, Joey Coulter and finally Parker Kligerman, but held them all off to take the checkered flag on a G/W/C finish at lap 152.

The NASCAR Nationwide Series 11th annual Feed the Children 300 is up next Friday night at Kentucky Speedway as Busch looks to claim victory number two for the weekend.

SM Staff
Previous articleBusch wins the NCWTS UNOH 225 at Kentucky Speedway
Next articleRagan Won the Battle, but Harvick is Winning the War