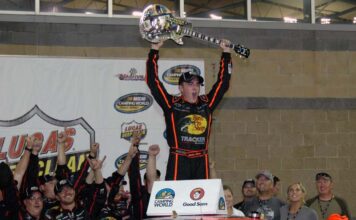 As middle Tennessee resident suffered the effects of an unusual heat wave, with the heat index surpassing 100 degrees for multiple days, NASCAR teams arrived in Nashville for the second race weekend of the year at the Nashville Superspeedway. [/media-credit]As the premier series, the NASCAR Sprint Cup Series teams enjoyed a weekend off, the second and third tier series began arriving in the Music City on Thursday.. The NASCAR Camping World Truck Series teams spent Thursday setting up in the makeshift garage area to make final adjustments to the trucks as they filed through NASCAR inspection.

Friday began with a couple of practice session for the Trucks, followed by qualifying. With only 34 entries to fill the 36 truck field, none of the teams needed be concerned about missing the race and only ran for starting positions.

To the surprise of few observers, the Richard Childress Racing teams of Austin Dillon and Joey Coulter easily captured the front row. Absent from the field were frequent Cup Series regulars Kyle Busch and Kevin Harvick.

Off to a quick start, the yellow flew quick on lap 5 as Johanna Long spun her number 20 Toyota in turn two. The field went back green 3 laps later and Long returned to the track. Dillon held the lead for 29 laps before being overtaken by Timothy Peters in the #17 Toyota. Peters held the lead until green flag pit stops began on lap 55 and the lead changed three times before Peters regained it on lap 63. Peters held that lead through lap 103 when a debris caution came out. On lap 104 Austin Dillon took the lead for two laps before surrendering it to Johnny Sauter.

Sauter would lead the field for 21 laps when Dillon took it back on lap 128. That would be the final change as Dillon outran the field for the final 23 laps, taking the checkered flag on lap 150. Finishing second was Johnny Sauter followed by Timothy Peters, Nelson Piquet Jr fifth, Todd Bodine, James Buescher, David Starr, Elliott Sadler and Joey Coulter rounding out the top 10.

The win was Dillon’s first of the 2011 season and the third of his 39 starts in the series. Johnny Sauter leads the NASCAR Camping World Truck Series points following the race, 18 points ahead of Dillon.

The NASCAR Nationwide Series takes to the track Saturday at 6:30 local time (7:30 EDT)