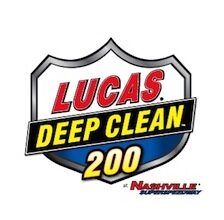 Lebanon, Tenn. (July 23, 2011) – Johnny Sauter continued his consistent top five finishes with a podium finish in second place at Nashville Superspeedway Friday night after starting sixth in the Lucas Deep Clean 200. Sauter, whose impressive run at last weekend’s Iowa Speedway resulted in a fourth place finish, continued with a strong performance at Nashville by both driver and the No. 13 Safe Auto/Curb Records/Carrier Chevy team, despite being overtaken by race winner Austin Dillon with 35 to go. He remains the NASCAR Camping World Truck Series driver championship points leader going into Lucas Oil Raceway this week.

Taking the green flag from the sixth place spot, Sauter quickly navigated to third position and remained in the top five through two early cautions. He reported being loose in, tight off from race start throughout – with crew chief Joe Shear, Jr. advising on a series of blowers on and off the tires and air pressure adjustments during pit stops. Green-flag conditions dictated a pit stop at lap 56, with a stellar stop by the pit crew – taking four tires, fuel topped and a half pound out of the rear tires. Sauter restarted ninth and continued to take positions to fourth within 15 laps.

The race completion came down to pit strategy, with Sauter taking four tires, enough fuel in while tires were being changed and an air pressure adjustment – while Dillon took four. Sauter had the fastest pit cycle of the leaders once again, emerging in second place and overtaking leader Dillon for 22 laps. Holding his ground as long as he could, continued loose conditions held off the truck from staying in the first position at the checkers. Sauter finished in second position, a second off the leader but a half second in front of third place finisher Timothy Peters.

“My guys were phenomenal here, what an amazing job by Joe and the 13 boys. They have worked their tails off to move a race shop, build these trucks, work on them all day, travel from Ohio, then go over the wall and be the best. All of the training they’ve done in the offseason is paying off. The truck is one of the fastest in our fleet – chassis 38 hasn’t had worse than a second place finish all year, and we just built it in the offseason. After leading practice all day, we knew we had a potential winner. I took four tires because I knew we had a loose truck there at the end – and you choose your tires based on track position and how the truck’s handling. Dillon just had a fast, fast truck and didn’t need four. It was great strategy for them and a good win. We did our best and came home with a good finish.”

Sauter is ready to continue his streak heading into Indianapolis. “This is one of my favorite, favorite racetracks and I love how it runs. I’ve done really well at Indy, so this is when it gets fun. It’s nice to be leading the points, sure, but again – with the new system, things change all the time. We’re focused on winning at every track, and the points will follow. That’s when you’re doing your job, and anybody who knows me knows how competitive I am – I want to be in Victory Lane.”

The NASCAR Camping World Truck Series goes under the lights next Friday, July 29th for the AAA Insurance 200 at Lucas Oil Raceway.

In this week's interview, Speedway Media catches up with Niece Motorsports newcomer, Ryan Truex. Truex recently joined the team for a full-season and will contend for the 2021 Truck Series championship.
Read more
Featured Stories

"It’s unbelievable," Rhodes said about winning twice in Daytona. "I don’t have words for it. I don’t even know what to say. This is so cool."
Read more