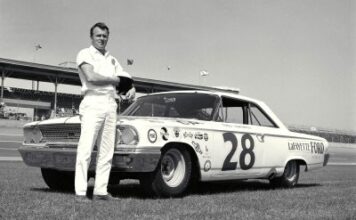 Fred Lorenzen was NASCAR’s first “Golden Boy.”  His aggressive style on the track gained him the admiration and respect of his fellow competitors. Off the track, his blonde good looks and charisma made him a favorite among the women fans. His biggest following, however, may have been the youngsters who stood in line for his autograph. Lorenzen never turned them away. Each one would get an autograph personalized with their name and signed “Fred Lorenzen #28.”

He was the consummate professional and used any tool available to gain an advantage out on the track. This included studying the weather, tire wear and gas mileage data.

Richard Petty once said, “Fred Lorenzen was total concentration; before, during and after a race.”

Lorenzen put it this way. “It’s just something I wanted to do,” he said. “When you decide you want to do something, you put your mind to it and you can do it. You’ve gotta really want it, though. I gave up everything to go racing.”

Lorenzen was born in 1934 in Elmhurst, Illinois, a suburb of Chicago. His love of racing began at an early age. As a child, he used to sit in his backyard under a tent listening to radio broadcasts of the Southern 500. It was here that he found his heroes.

His love of racing grew from that early age and before long he began building his own go-karts and racing them through his neighborhood. He had at least one close call with the law when he was 12 but “Fast Freddie” outran the police in his homemade go-kart. They soon caught up with him at his home and confiscated the go-kart but I’d be willing to bet that he felt like he had won his first big race.

Lorenzen built his first car at the age of 13 and never looked back. After graduating from high school, he began racing modifieds and late models. His NASCAR debut was in 1956 at Langhorne Speedway where he finished a disappointing 26th due to a broken fuel pump.

He continued to hone his skills drag racing and won the National Gas Eliminators at the age of 18. A few years later, he moved on to stock car racing.  Lorenzen won the USAC (United States Auto Club) Championship in 1958 and 1959.

His big break came in 1960 when he received a phone call that would propel him into the big leagues. The call was from Ralph Moody asking Lorenzen if he would like to drive for him. This wasn’t the first time Moody had approached him, but this time Lorenzen had the good sense to say yes to the offer.

He teamed up with Holman-Moody to drive full time in the NASCAR Grand National Division (currently Sprint Cup), driving the now famous white and blue No. 28 Ford. Ralph Moody would soon become not only his car owner but a good friend as well.

During his first season, the rookie faced off against veteran driver Curtis Turner and won the Rebel 300 at Darlington Raceway.

In turn two on the final lap, at 130 miles an hour, Lorenzen faked high then dove low. While Turner was frantically trying to run him into the guardrail, Lorenzen passed him on the inside, taking the lead and the victory away from Turner.

After the race he would forever be known as “Fearless Freddie.”

It was one of Lorenzen’s favorite victories.

“That race was extra special because the track is so very, very special and because I was able to beat Curtis Turner,” he said. “You’ve got to remember that for a kid like me, names like Curtis Turner, Joe Weatherly and Fireball Roberts were hero stuff.”

The next year he entered only 16 of the 62 races on the 1964 schedule. Lorenzen won eight of those races, five consecutively. In all, he finished in the top 13 in four different seasons while running a partial schedule.

One of his most memorable races came in 1966 at Atlanta Motor Speedway when he drove a rather unique car nicknamed “The Yellow Banana.”

There was a Ford boycott for much of the season and NASCAR looked the other way when it came time to inspect this unusual car. Attendance was down and they were desperate to put fans in the empty seats.

The car was owned and prepared by Junior Johnson. The front of the car was sloped downward, the roofline and windshield were lowered and the tail end was kicked up. Even though it obviously didn’t come close to fitting NASCAR specifications, they allowed Lorenzen to compete.

He crashed while leading the race on lap 139.

A crew member was heard to say, “No wonder, I ain’t never seen anybody who could drive a banana at 150 miles an hour.”

After the race, he was told to never bring the car back again.

During his brief career, Lorenzen found continued success, setting new records along the way and earning another moniker, “The Elmhurst Express.” When the win was on the line, Lorenzen didn’t stop for anyone.

His career total of 158 starts includes 26 wins and 32 poles, but no championships.

The partial schedules probably explain the lack of championship trophies. One can only imagine what he might have accomplished if he had competed full time. Some think he may have given Richard Petty a run for his money.

But Lorenzen doesn’t seem to have any regrets.

“I didn’t really want to (run a full schedule),” Lorenzen said. “It’s too much traveling. I get tired of traveling. You’re gone all the time. These guys that are doing it right now, I don’t see how they do it. You’re never home.”

While he may not have won any Cup championships during his career, Lorenzen owned the record books.

2)    In 1963, he became the first driver in NASCAR history to win over $100,000 in a single season. What makes it even more remarkable is that    he only competed in 29 of the 61 races on the schedule and finished third in the points standings.

4)    In 1966, he became the first driver in NASCAR history to win races at all five of the south’s original superspeedways.

5)    Before his first retirement in 1967, Lorenzen became the sports all-time superspeedway winner with 12 wins.

6)    He was the first driver to win at Martinsville Speedway four consecutive times. Fred Lorenzen was also the very first recipient of the coveted Martinsville Grandfather Clock on September 27, 1964.

In 1967, at the age of 33, Lorenzen retired while at the pinnacle of his career. He said he had accomplished all that he had set out to do and was burned out.

“I hated the traveling,” he said, “that’s why I quit. It wasn’t fun anymore.”

There’s no question that the death of his friend and teammate Fireball Roberts in 1964, also took its toll on Lorenzen.

After Roberts’ death, Lorenzen said, “He was a god to me. When Fireball died, it turned my whole racing career around. He was like Santa Claus was to all the little kids. I thought Christmas had been taken away.”

“His passing changed my whole meaning of racing. When I was a kid, back in Illinois, I listened on the radio to Fireball Roberts driving in the Southern 500. I can’t tell you how much his death hurt me.”

Lorenzen returned to racing for a short stint in 1970-72. He couldn’t recapture his glory days but managed 11 top-five finishes and two poles.

In 1972 Lorenzen retired for the final time and began a successful career in real estate.

In recent years, his health has deteriorated and he suffers from dementia. But Lorenzen still has vivid memories of his days racing.

His family is proud of all that he has accomplished, but Amanda and her brother didn’t need trophies to tell them how special he is.

His daughter Amanda says, “Growing up we played pool and ran around in his trophy room. We knew Dad had won on all the speedways and was a real success in stock car racing in his time. However, he was just our Dad, our Dad the hero.”

“It wasn’t until just recently as Dad’s health has begun to decline and we have stepped in to preserve his legacy that we realized our dad was and still is hero to many. We receive so many wonderful letters from fans sharing their stories and memories. It’s been a really special thing to learn about our Dad. We are truly proud and thankful for all.”

She encourages fans to continue to show their support by sending cards and letters to her Dad at the address below.

Lorenzen was once asked how he wanted to be remembered.

1978 – Inducted into the National Motorsports Press Association Hall of Fame

1991 – Inducted into the International Motorsports Hall of Fame

2001 – Inducted into the Motorsports Hall of Fame of America.

Angela Campbell
A native of Charlotte, NC, Angela (Angie) was first introduced to racing by her father. An avid fan of NASCAR, she found a way to combine her love of racing with her passion for writing. Angie is also an award-winning member of the National Motorsports Press Association. Follow her on Twitter @angiecampbell_ for the latest NASCAR news and feature stories.
Previous article
NOTES FROM THE NASCAR NATION: A TAIL GATE PARTY IN INDIANA
Next article
New Ferrari 458 Italia GT car tested at Daytona