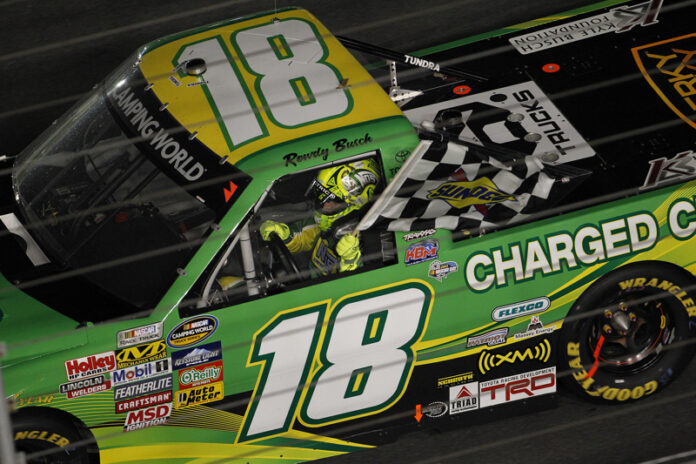 NASCAR’s Camping World Truck Series will be racing on the one venue that made the series famous: a short track. Friday night’s AAA Insurance 200 is the annual NASCAR style tail gate party hosted by the Lucas Oil Raceway At Indianapolis. The .686 mile oval has been the scene of tail gate bashing since the series’s inception back in 1995. It’s a venue that this series was born to race on. [/media-credit]That’s the good news. The bad news is: this apparently is going to be the last NASCAR Camping World Truck Series event at this prestigious venue. An announcement earlier this month said that both the truck series and NASCAR’s Nationwide Series, which will race it’s final event at Lucas Oil Raceway Saturday night, will not be returning in the 2012 season. The Nationwide Series will move down the highway to the famed Indianapolis Motor Speedway to become part of the Sprint Cup’s annual Brickyard 400 weekend. It’s not exactly clear which track will get the truck series’ date next year. It’s a move that is not understood by many racing observers.

The NASCAR Camping World Truck Series has been enjoying a tremendous 2011 season filled with highly competitive racing. It has often been the class act of many of the NASCAR weekends all season long. Expect some high intensity racing this Friday night. The AAA Insurance 200, at the Lucas Oil Raceway at Indianapolis is going to be an event you don’t want to miss.

When you think of high performance levels at this track you automatically have to think of Ron Hornaday Jr. The truck series’s four time champion has accumulated some astounding numbers at this track. Hornaday will be making his 12th start there driving his Kevin Harvick Inc #33 Chevrolet with sponsorship from Pinnacle Foods, and their Vlasic Pickles, Peppers and Relish brand, along with Kroger Super Markets.

Hornaday is the defending race winner from last year, but the Lucas Oil Raceway stats don’t start and end there. In his 12 starts he has a series high four wins along with eight top five, and eight top ten, finishes. He’s also led 505 laps there. Since the 2005 season, when NASCAR’s Loop Scoring system was created, Hornaday stats at this track includes an average starting position of fifth and an amazing average finish ratio of 1.83.

For the second week in a row, Hornaday’s KHI team mate will be Elliot Sadler who will be making his first official series start at the Lucas Oil Raceway in the #2 Hunt Brothers Pizza Chevrolet. However, Sadler does have some experience at this raceway from three previous starts in the Nationwide Series. He will be on board Friday night to help with KHI’s quest for the truck series’ coveted Owner’s Point Championship. The KHI #2 Chevrolet Truck, with DeLana Harvick listed as the owner, is currently second in those standings 31 points behind the Kyle Busch Motorsports Toyota.

Also for the second race in a row, a NASCAR Camping World Truck Series event will be Busch free. Kyle Busch will not be in his familiar, self owned, #18 Toyota Friday night. He has instead elected to once again place his development driver, Josh Richards, in the seat.

The one driver who will be bringing a great deal of momentum to the Lucas Oil Raceway Friday night will be Austin Dillon, last weekend’s race winner at Nashville. Dillon is currently second in the series’ championship standings and will be looking to eradicate the 18 point lead currently held by Johnny Sauter who is also expected to be very competitive Friday night.

Friday night’s AAA Insurance 200 is 200 laps/137.2 miles around the Lucas Oil Raceway’s very challenging .686 mile oval which is actually located in Clermont-Indiana just a few minutes down the highway from the Indianapolis Motor Speedway.

The race has 37 official entries vying for the 36 truck field. 12 of those entries are on the go or go home list meaning they do not have a guaranteed start in the race because they are currently outside of the series’ top 25 in owner’s points. These teams will have to rely on qualifying speeds to earn their starting berth.

The AAA Insurance 200 will be broadcast live by SPEED with the pre-race show beginning at 7 pm eastern time.