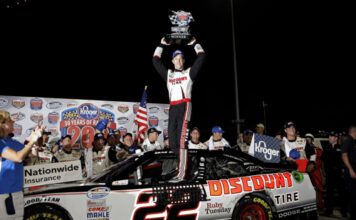 Brad Keselowski won a side-by-side, bumping and grinding battle with Ricky Stenhouse Jr. in the final laps of Saturday nights NASCAR Nationwide Series (NNS) race at Lucas Oil Raceway and made the pass with a handful of laps remaining. [/media-credit]But a late spin by Elliott Sadler setup a green-white-checkers restart. Keselowski was able to hold off James Buescher and Stenhouse Jr. to win the final NNS race at the speedway.

“We ended up restarting in second position on the outside lane and I knew that if I could get around the 6 car that we had a shot at the win. I had a great short-run car that could give Ricky (Stenhouse Jr.) a run for his money. If the race was two of three laps longer, I’m sure Ricky would have drove around us. Our Discount Tire Dodge Challenger was great on the short run. It’s great to get back to victory lane again.” Keselowski said.

Stenhouse Jr. led 188 laps and dominated the night until lap 188 after a yellow flag came out when Trevor Bayne blew an engine. Stenhouse Jr. took the inside on the restart which allowed Keselowski to first battle on the outside and then bump and grind his way by on the inside.

“I just knew that I needed to get a good restart. He still beat me. We drove into 1 and 2 and he had a great run, he was clearing me. So I crossed back over, got back to the bottom and raced him into 3. The next thing I knew I was in the lead.” Keselowski said.

On lap 175, Tim Andrews, Michael Annett and Steve Wallace were involved in a hard crash between turns three and four. Andrews and Annett both were stopped at the outside wall and Wallace spun coming out of four and hit teammate Annett with the back of his car, spinning it around in the air and then into Andrews’ car. This brought out a 12 minute red flag condition for track cleanup.

“I got loose there underneath the 40 (Tim Andrews) — I think we were lapping him for about the 10th time tonight.” Annett said.  “I was probably over aggressive on my part, but it’s just a shame to tear up a good race car — actually two Rusty Wallace Racing cars. I heard Steven I guess got jacked up from behind slowing up for the wreck when the guy behind him didn’t see it and tore us both up. Just a shame, but we have Iowa next weekend and that’s a big one for us.”

“I got in the brakes and the care got sideways. It just slid all the way through the corner and there was nothing I could do except try to nail it to accelerate away from Michael (Annett). It was just one of those racing deals. I hate it for both of our cars. Both of our cars were running good and we were getting better. It’s just one of those things.” Wallace said.

On lap 193, Justin Allgaier’s car caught on fire while driving around under caution. Allgaier has to take his flaming car behind pit wall and Reed Sorenson’s crew quickly pulled him out. He finished 27th.

Sadler started 42nd and worked his way through the field. But on lap 198 while battling for third spot be lost control and spun between turns three and four, collecting his Kevin Harvick Inc. teammate Austin Dillon. What could have been a top-5 finish for Sadler, ends up being 16th.

Stenhouse Jr. moved into the series points lead by 4 points over Reed Sorenson.

The series heads to Iowa Speedway for the U.S. Cellular 250 presented by the Enlist Weed Control System on August 6th.