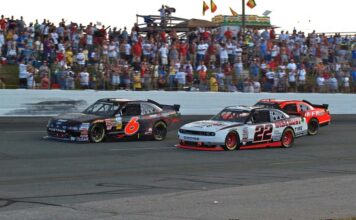 The last race for the NASCAR Nationwide Series at the Lucas Oil Raceway started off looking like Ricky Stenhouse Jr. was going to stink up the show and lead the entire race. [/media-credit]Stenhouse Jr. started from the pole and lead 189 laps of the scheduled 200 lap race. In fact, a majority of the race was lead by the three Roush Fenway Racing cars of Stenhouse Jr, Trevor Bayne, and Carl Edwards as they all ran  in the top five most of the night.

The first accident of the night occurred on lap 177 when the 40 car of Tim Andrews and the 62 of Michael Annett spun into the turn three and four wall. Steve Wallace entered turn three at full speed and hit his teammate, Annett hard. Wallace then slammed into the car of Andrews which was also stopped on the track.

The caution flew again for Trevor Bayne’s blown motor on lap 190, setting up a 10 lap shootout to the finish. Keselowski took the lead from Stenhouse with seven laps to go in the race.

The caution flew again a few laps later for a wreck involving Elliott Sadler after he and Stenhouse got together battling for second place.

The ensuing caution set up a green, white, checker finish. Keselowski got his second win of the year in the Nationwide series.

Stenhouse is the points leader followed by Reed Sorenson and Elliott Sadler.