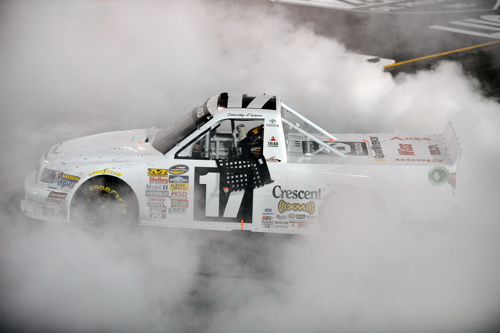 “I can’t say enough about the guys on this Red Horse Racing Toyota Tundra in victory lane tonight. We had a tire coming apart. I spun out over here in turns one and two and came down pit road. Butch Hylton (crew chief) made a great call to put four tires on. But the guys do a phenomenal job. We had a little hiccup last week, but they made up for it this week. Like I said last week, I love my guys.  They get me on and off pit road well.” Peters said. [/media-credit]Peters started 16th and spun just before the halfway point when a tire went down. “I went down in the corner and I had good grip, and all of a sudden, I lost it.” Peters said.

But Peters battled back to second place with 20-laps remaining. He slowly closed the gap on Buescher and made the pass to win what might be the final truck series race at the speedway. “I was trying to be patient, trying to be patient with the throttle, and it paid off.” Peters said. “I hope that they bring the trucks back here, and I hope that I’m not the last winner here. But if they do take it away, I can sit back home in my La-Z-Boy one day, retired, and say I won the last race there. That’s pretty cool.”

“We were running good sometimes and something happens. I’m really proud of my guys. We’re a little bit off in practice, like three-tenths and they made changes. It was better for qualifying and race trim was a tick better. Our first pit, Rick (Gay, crew chief) did an awesome call and we were good — we were really consistent. Congrats to Timothy (Peters) for the win and our two (Red Horse Racing) trucks in the top-four is pretty good.” Paludo said.