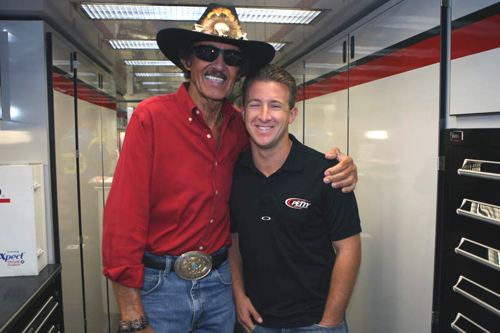 A J Allmendinger, driver of the No. 43 Best Buy Ford for Richard Petty Motorsports, sits in 17th in the point standings without a win. Yet what really bothers him is his inconsistency and the need to ‘just bet better.”

“I think we’re not as good as we want to be for sure,” Allmendinger said. “The biggest thing is that we are just a little bit too inconsistent.” [/media-credit]“There are certain races when we’re on and we’re fast and then it seems like something happens, like a late race yellow catching us out,” Allmendinger continued. “But when we’re bad, we’ve been really bad.”

“It seems like last year when we were bad, we were 18th or 19th and now this year, we’re 29th,” Allmendinger continued. “Those are the things we’ve got to get better.”

“We’re just too inconsistent and that’s something we need to work on and build from,” Allmendinger continued. “I think we haven’t done a lot of things to shoot ourselves in the foot and taken ourselves out of races, but we just need to be better overall as a race team.”

Allmendinger is most certainly putting a great deal of faith in his new crew chief, Greg Erwin, who joined RPM shortly after being released by Roush Fenway Racing as Greg Biffle’s crew chief. In fact, Allmendinger was most pleased with their performance at the Brickyard, even though the team finished in the 22nd spot.

“Hopefully with the addition of Greg, we will improve,” Allmendinger said. “I thought Indy last week was actually a fantastic weekend.”

“The finish wasn’t what we wanted,” Allmendinger continued. “It came down to fuel and then that wreck that happened and we got some grass in the grille.”

“Assessing the weekend, I thought it was a really good weekend, especially the first weekend working together,” Allmendinger said. “Hopefully, that’s something to build off of and these last whatever races.”

“It’s a new start,” Allmendinger continued. “Greg’s got a lot of experience and it’s stuff that I can pull from and learn from.”

“There’s a lot of these race tracks that are our weaker tracks that Greg’s been really good at so I say, that’s stuff that I can learn from,” Allmendinger said. “Hopefully we can go to these races and have better luck and be better as a race team.”

With his new crew chief, Allmendinger certainly hopes that the stretch of first time winners may just extend to him. But he also jokes that the only way that will happen is by attrition.

“People point to me because there’s not a whole lot of first time winners left,” Allmendinger said. “So, it’s about attrition.”

“Honestly in the end, winning is the ultimate goal when you show up,” Allmendinger continued. “But we’ve got a long way to go to worry about that.”

“Maybe this weekend, we are good enough to win,” Allmendinger said. “Who knows? But that’s the way I look at it.”

Allmendinger also has his own unique way of looking at Pocono Raceway. And he definitely thinks the track lives up to its ‘Tricky Triangle’ reputation.

“It is definitely tricky,” Allmendinger said. “The shifting definitely added a different element back into it. And Turn One was way rougher than it had been in the previous years.”

“You’ve got to be able to get through those bumps and be solid through that corner,” Allmendinger continued. “But you can’t focus on it so much that it hurts Turns Two and Three.”

“I think that’s what happened last race,” Allmendinger said. “We were so bad in One and we kept trying to fix it that we made Two and Three even worse.”

“I think that watching some videos and talking to Greg about some things, we’re going to go in with a different game plan and keep working on it,” Allmendinger continued. “We weren’t terrible last race but we weren’t great. Greg’s brought some stuff over that he learned when he was with Biffle, so we’ll see.”

In addition to worrying about Pocono weekend, Allmendinger also has contention for the Chase on his mind.

“The door is definitely not closed,” Allmendinger said of his Chase chances. “We have six races left and we’re not that far from being that highest guy in points that if you do get the win, you move into the Chase spot.”

“But ultimately if you win a race on luck and you’re not good enough to be in the Chase, then there’s no point to being in the Chase anyways.”

Whether or not he is in the Chase or outside looking in, Allmendinger just wants to be better in the latter half of the season than when they took the green flag at Daytona.

“We’ve just got to be better,” Allmendinger continued. “That’s all that matters. And whether that puts us in the Chase or not, then whatever.”