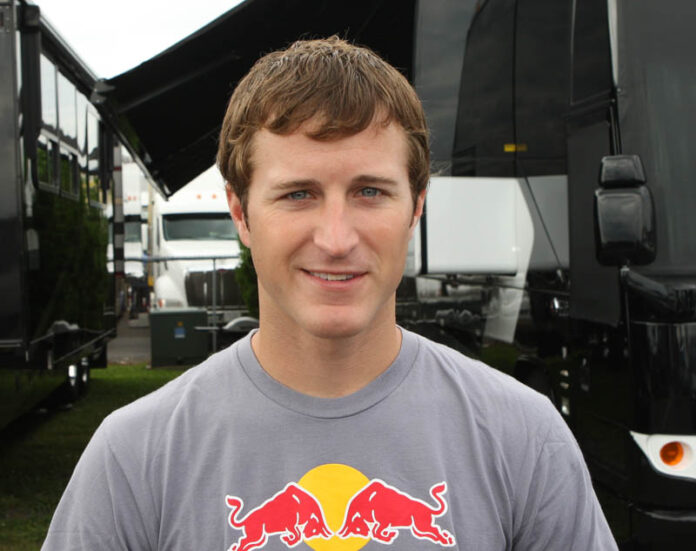 [/media-credit]Kasey Kahne, driver of the No. 4 Red Bull Toyota, has been juggling to keep many balls in the air as he motors into Pocono race weekend.

One of the balls that he has been most worried about juggling is qualifying well at the ‘Tricky Triangle’. But Kahne need not have worried as he scored the outside pole, his 10th top-10 start in 16 races at Pocono.

Kahne will turn his attention next to another critical ball to juggle, staying good throughout the 200 lap, 500 mile Good Sam RV Insurance race.

“I’ll just try to get through the corners,” Kahne said. “It’s such a rough track.”

“We looked at notes from earlier in the year and what we struggled with or were good at and what we’ve learned since then,” Kahne said. “We will take all that knowledge and hopefully make ourselves better.

“This has been a great track for myself and for our team and I think we can do good.”

Some of the other balls that Kahne is juggling are his intense attempts to make the Chase, finishing out with Red Bull and transitioning to Hendrick Motor Sports, managing his own sprint car team, as well as trying to raise money for the Kasey Kahne Foundation.

As far as the Chase, Kahne firmly believes that he and his team are still in the hunt. But he also acknowledges that he will not make it in on points.

“But things can change so we just have to figure out how to win to get in the Chase,” Kahne continued. “We just got a little too far behind in the points to race our way in points wise.”

If he does not qualify for the Chase with his Red Bull team, Kahne will be disappointed, but not bereft.

“If we don’t make the Chase, it won’t be a horrible season,” Kahne said. “But it definitely won’t be what we shot for.”

“And we’ll just still have to finish the season as strong as we can and try to win.”

Another ball that Kahne is juggling is his transition from Red Bull Racing, his place holder team this season, to his more permanent gig at Hendrick Motor Sports in 2012.

“We’re always preparing for next year,” Kahne said. “Kenny Francis (crew chief) is going with me next year and we’re going to work together.”

“It can all benefit us for next year.”

Kahne admits that he will really miss Red Bull Racing, from the excitement of their brand to the special friends that he has met.

“Red Bull is a really cool partner and a lot of fun to work with,” Kahne said. “They’re exciting and they enjoy life and racing and all that.”

“I think I’ll miss some of that and some of the new people that I’ve met and been able to work with,” Kahne continued. “There are some really good people that are there. I’ll miss that kind of stuff.”

“As far as Hendrick, I’m looking forward to the best opportunity I’ve ever been given in Cup racing,” Kahne continued. “When you get an opportunity like that, it’s up to you to take advantage of it.”

Another ball that Kahne has been juggling is ownership of his own sprint car team. This has been especially difficult as his driver, Joey Saldana, recently wrecked and is out for the season and Kahne took his own wild ride in his car, flipping out of the Williams Grove track.

“It’s been a tough couple of weeks,” Kahne said. “Joey’s out of the hospital but he’s really banged up.”

“He got crushed pretty much by another car,” Kahne continued. “So, he’s out for the season.

As for his own condition after his wreck at the Grove, Kahne admitted that he had “about a three day soreness.” Kahne also realized that he created a firestorm of discussion as to whether or not Cup drivers should be taking those chances racing in lower divisions.

“Yeah, I got a call from Rick Hendrick,” Kahne admitted. “And I got calls from just about everybody.

While Kahne continues to juggle those calls, his final ball that he is keeping in the air is one that he is intensely passionate about, the Kasey Kahne Foundation.

“We’re still really after it and doing as much as we can for underprivileged, chronically ill children through the Kasey Kahne Foundation,” Kahne said. “One thing that’s really neat is what Sprint’s doing, giving us the opportunity to win a lot of money, a million dollars, for our Foundation here in the next five races.”

“We got a chance to do that since these are really good tracks for us,” Kahne continued. “Sprint’s really put up a neat program for everybody to shoot for. It’s pretty awesome.”

“So, that definitely motivates me,” Kahne said. “To win a million for yourself is great, to win it for a fan is awesome but to win it for chronically ill, underprivileged children would be the best.”