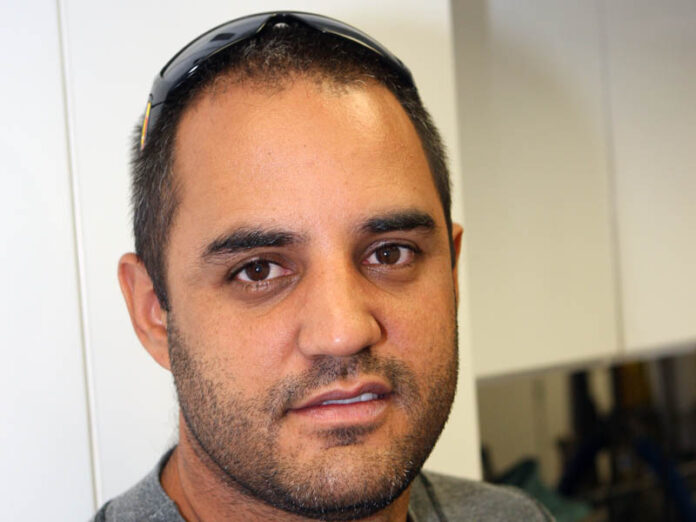 [/media-credit]Given his history with Formula One, his status as an Indy 500 winner, and now his five year tenure with NASCAR, Juan Pablo Montoya is most certainly one of racing’s most recognized figures.

[/media-credit]But this one driver, now securely behind the wheel of the No. 42 Target Chevrolet for Earnhardt Ganassi Racing for this season as well as next year, most certainly has many facets.

One of Montoya’s most visible facets is his passion for racing, of all sorts and types, as well as winning in whatever series. But for this talented driver, NASCAR is one of the most challenging forms of racing in which he has ever participated.

“For me it’s not just stock car racing, it’s racing in general,” Montoya said. “I have been in all kinds of racing and it’s just a passion for winning.”

“This sport is the hardest,” Montoya said. “There’s so many, many more drivers than any other series I’ve been in that winning is that much harder. You have that many more competitive cars, so it’s always tough.”

How does Juan Pablo maintain his passion even when he is not winning and in spite of sitting 20th in the point standings for the NASCAR championship Chase?

“But for me, I want to try to win a race without the lucky break,” Montoya continued. “You know, I’ll take a lucky break any day, but you really want to win the races spinning everybody out there.”

With this passion and extreme desire to win, another facet of Juan Pablo Montoya, at least one that is highly perceived, is that he is not only assertive but a bit aggressive. And with that, has come some hard racing in return.

“I think everybody races everybody differently,” Montoya continued. “For me, it’s always different.”

“Some guys are good to you and you’re good to them,” Montoya said. “And when people are bad to you, you’re bad to them.”

One facet that Montoya thinks most fans do not know about him is that his racing is not only calculating but very precise.

“I think you’re the first person to say that and I think that’s pretty accurate,” Montoya said. “That’s something that I do.”

“I always try to be consistent,” Montoya said. “Just the way you run in open wheels, you try to adhere as well.”

Montoya plans to continue his calculating facet of racing even with his new crew chief, Jim Pohlman. Prior to the Brickyard 400 last weekend, Pohlman was named to replace Brian Pattie, Montoya’s crew chief since 2008.

“I think the start of the relationship is really good so far,” JPM continued. “Of course, we’re going to have good moments and bad moments but Jim is doing a really good job and he’s very open to anything, which is pretty cool.”

One of the most important facets to Juan Pablo Montoya is one that he is quite proud of, bringing more of an international flavor to the traditionally all-American sport of stock car racing.

“I think NASCAR knows how many people watch international but they don’t make a big deal of it,” JPM continued. “They try to keep it an all-America sport but it’s cool that people international are paying attention.”

Another facet of Montoya that many fans are well aware of is his penchant for utilizing social media, especially Twitter.

“I think it’s cool for the fans,” Montoya said. “Somebody that follows me wants to know what I do in a regular day.”

“I don’t think I’m that exciting,” Montoya said. At that moment, his teammate Jamie McMurray walked by, muttering that he definitely did not think Montoya was exciting either, to which Montoya shouted after him, “I agree!”

“I don’t do it to promote this or promote that,” JPM continued re his Twitter usage. “I just do it for fun, you know what I mean?”

“I fly my remote control planes and wind surf, although I haven’t done a lot of wind surf this year, and I play a little golf,” Montoya continued. “It’s fun for people to see what I do. I don’t do it for anything else.”

A critical facet of the racing personality of Juan Pablo Montoya is his dedication to trying to maintain balance with his career and his family. Yet, he openly acknowledges that he is challenged in that area by his own ‘child-like’ behavior, which often creates just a wee bit of strain between he and his lovely wife Connie.

“It’s really hard because I’m a kid,” JPM said with a chuckle. “So, you’ve got to balance the family, the toys and the work. So, that’s always really hard.”

The last facet of Juan Pablo Montoya is his dedication not only to his own family, but to other families in need.  He and his family have been supporting the charity Formula Smiles for quite some time, raising funds and helping Columbian children who are burdened by poverty and violence.

“We keep doing a lot of different things for the Foundation,” Montoya said. “We try to keep growing it.”

“It’s never easy to get the support from the people,” Montoya said. “But it’s fun to be there.”