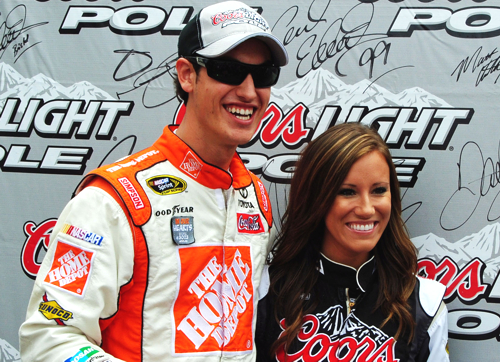 After weeks of speculation about his future with Joe Gibbs Racing, particularly in light of the Carl Edwards’ contract negotiations, Joey Logano made a statement about his place in this weekend’s race festivities. [/media-credit]The driver of the No. 20 Home Depot Chevrolet scored the coveted pole position at Pocono Raceway, with a time of 52.309 seconds and a speed of 172.055 mph.

This was Logano’s third pole in 96 NASCAR Sprint Cup Series races and his second pole and 10th top-10 start in 2011. This was his first pole at Pocono and he also took the honors of becoming the youngest pole winner ever at Pocono at the age of 21 years, two months and 13 days.

“It’s a really big deal,” Logano said of his pole run. “We’ve been doing a good job and building momentum. Confidence in the team is up, especially in me.”

Logano acknowledged hearing the rumors about Carl Edwards potentially taking his place at Joe Gibbs Racing. In spite of that, he refused to give in, focusing instead on getting all he could out of the ‘Tricky Triangle.’

“As far as I knew, they were just rumors,” Logano said of Edwards assuming his ride. “I focused in 100% and tried to make myself the best race car driver I can and it’s been paying off.”

“It’s in the back of your mind. When you’re watching TV, how do you not think about it,” Logano continued. “But if your owners are behind you, what do you have to worry about really?”

“I’ve learned a lot through the downs we had this season,” Logano said. “I have become a leader.”

“Our lap was good but Joey’s was just better.”

Kahne acknowledged that although he was pleased with the outside pole, there were many more challenges yet to come throughout the lengthy Pocono race.

“So many things will happen throughout the race and it will be like that here,” Kahne said. “We have to stay on top of it and make good decisions so maybe we will be there at the end.”

“It’s been a while since I’ve qualified up front,” Truex Jr. said. “We had an interesting day yesterday and everyone knows how tricky Pocono is.”

“We struggled but worked on the car and got it the way we wanted it,” Truex continued. “We went into qualifying with an entirely different package.”

“It wasn’t a perfect lap but it’s nice to start up front at Pocono.”

Carl Edwards, driving the No. 99 bug-on-the-side Ortho Home Defense Max Ford, and Kurt Busch in the yellow No. 22 Shell/Pennzoil Dodge, rounded out the top five.