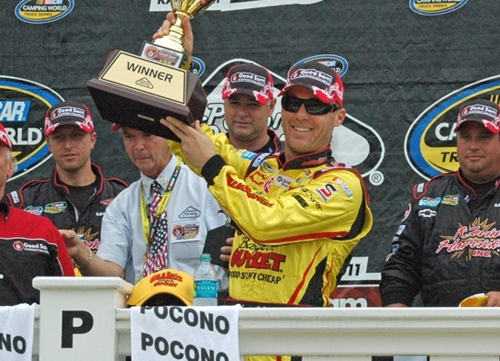 In a rain-delayed race at Pocono Raceway, lasting from Saturday afternoon to Sunday morning, one driver, Kevin Harvick, survived the marathon to take the checkered flag. This is Harvick’s first victory in the Truck Series in 2011. “You just hope that the truck didn’t screw itself up overnight,” Harvick said of the marathon race event. “Luckily it was fast and we were able to manage our fuel.

“It didn’t detune itself overnight.”

“Harvick admitted that this particular race truck has been fast for the last several weeks. He also acknowledged that he had to go into fuel conservation mode for the final green, white, checkered finish.

“They’ve been working hard on a lot of things to make the truck better,” Harvick said of his team. “You just have to not make mistakes.”

“They told me we were good on fuel and I knew I had saved at least a couple laps of gas,” Harvick continued. “All in all I think the fuel mileage thing went out the window with all the cautions.”

“And then it was all about track position, which was important.”

When asked what difference the marathon, two-day race meant to Harvick, it apparently at least meant him getting out of bed a bit earlier than normal on a Cup race day.

“I feel like I’m a lot more awake than I would have been,” Harvick said with a laugh. “It just never hurts to get out and get in the rhythm.”

“You just have to change your suit and go back after it this afternoon.”

With his Pocono Truck win, Harvick also secured his own place in history by tying Bobby Hamilton for 12th on the all-time Series wins list.

Bruce Cook, Harvick’s crew chief, echoed his driver’s assessment of the race truck and the fuel situation. But he also admitted that he had little to no sleep because of the rain delay from Saturday afternoon to Sunday morning.

“Our truck was really good,” Cook said. “Having the rain basically meant not sleeping overnight.”

“We knew we were close right off the bat,” Cook said of the fuel mileage challenges. “But with the caution coming out, we were OK on fuel.”

“Kevin took over conserving but there were no major concerns,” Cook continued. “The race speaks for itself.”

Kyle Busch finished in the runner up position. The driver of the No. 18 CocoaVia.com Toyota scored his first top-10 finish at a track that he has always found a bit tricky.

“It certainly was a good run for us, yesterday and today,” Busch said. “We unloaded here Friday and felt we were pretty decent off the truck but we were definitely off the 2 truck. He was stellar.”

“We just tried to minimize our losses and come out of here with the best finish we could,” Busch continued. “A few of those cautions helped us and fortunately that moved us back up to second.”

“It was fun racing the trucks here and it was certainly entertaining.”

Young up and coming driver James Buescher, behind the wheel of the No. 31 Wolfpack Rentals Chevrolet  came in third, posting his first top-10 finish at Pocono Raceway.

“It was definitely a good day for us,” Buescher said. “We unloaded really fast off the truck yesterday or two days ago, whenever we practiced.”

“We worked hard to find a good balance,” Buescher continued. “It’s been a good race yesterday and today.”

Joey Coulter, another up and coming driver, was the highest finishing rookie. The driver of the No. 22 Darrell Gwynn Foundation/RCR Graphics Center Chevrolet finished sixth.

“It went well,” Coulter said. “It was a drag race until the end.”

“It was pretty wild,” Coulter continued. “It was probably the most fun race I’ve been in.”

Johnny Sauter, behind the wheel of the No. 13 SafeAuto/Carrier/Curb Records Chevrolet, and Austin Dillon, driving the No. 3 Bass Pro Shop[s/Tracker Boats Chevrolet, rounded out the top five.