Teammates Having at It: Edwards and Stenhouse Jr. Feud to a Fantastic Finish 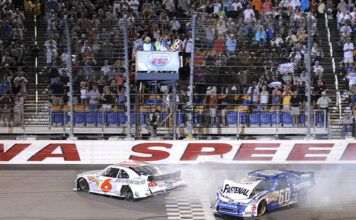 Both say they’re going to stand their ground, one says the other is too aggressive.  No, it isn’t two rival drivers trading barbs. It’s Roush- Fenway Racing teammates Carl Edwards and Ricky Stenhouse Jr.

Saturday night in Iowa it was Stenhouse who got the best of Edwards in a fantastic finish that had both drivers wrecking across the finish line when Stenhouse blew his engine coming to the checkered flag and Edwards slammed into the back of him sending them both spinning across the line. [/media-credit]A fitting end to a race where team owner Jack Roush said he saw plenty of opportunities for things to go horribly wrong.

Roush continued saying, “Ricky races pretty hard and Carl I’m sure sometimes wishes Ricky wouldn’t race him so hard. In five years Ricky will be in the same place Carl is today and there will be somebody else pushing him harder than he wants to be pushed.”

Early in the event while racing for the lead the two traded paint as Edwards got into Stenhouse Jr. The young driver came over the radio and told his team that Edwards was “done when I get to him.” Cooler heads eventually prevailed, Edwards said they were even but the RFR competitiveness wasn’t done.

With less than 25 laps to go the two blew by leader Elliott Sadler and went after each other again. Stenhouse held onto the lead and went on to win for the second time in his career. He also sweeps the Iowa events for 2011.

“We both race really hard, doesn’t matter who it is,” said Stenhouse about his teammate. “At the same token we probably raced a little too hard. I felt like he ran us up the race track in turn four and got into us and then after that I was going to drive as hard as I could to get back by him and that’s why I didn’t cut him any slack passing him for the lead.”

After finishing second to Edwards on a few different occasions already this season and letting a win get away at Lucas Oil Raceway last weekend after dominating, Stenhouse wasn’t about to let it happen again. According to him, Edwards has won his fair share of races and he [Stenhouse] wants to win a little more right now.

It won’t come easy when Edwards is in the field; the two teammates are not seeing eye-to-eye. They also had contact last weekend, which they had to end up talking about. This week they’ll do the same.

“Ricky and I are fine,” said Edwards. “Jack came over said this is exactly what’s supposed to be happening. You’re supposed to have a young guy that’s fast, that’s frustrating everyone because he’s too aggressive. That’s all that’s going on with Ricky, he’s really, really fast.”

Edwards says Stenhouse got a little excited on Saturday and that he’s being over aggressive. Stenhouse admits that he gets frustrated but says it’s because he wants to win and knows his team is capable.

While sometimes they have to rein him in during parts of the race, it hasn’t been too detrimental to the No. 6 team’s season. They currently lead the points with two win – more than any other NNS driver competing for the championship – and the most top fives of any other driver. Teammate or not, Stenhouse isn’t going to back down.

“This is a business where you have to race people the way they race you and you have to stand your ground,” said Edwards. “Whether it’s your teammate or not, sometimes it’s not all roses.”

It doesn’t have to be roses if it results in more finishes like Saturday night. It was almost like they didn’t even realize they had two wrecked racecars in their one-two finish.