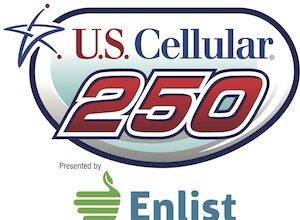 “This was just an awesome job from this No. 6 team,” said Stenhouse Jr. “They work harder than anyone out there; all the guys at the shop and everyone at Roush Yates engines. I have to thank the good Lord above; he’s helped us through so much. I have to thank Nationwide Insurance for giving us the opportunity to come out here and put on a show for all these awesome fans. I just wish we had Blackwell Angus Beef and Cargill on this car tonight.”

Stenhouse and Roush Fenway teammate Carl Edwards engaged in a heated battle throughout the course of the race, with Stenhouse using a dramatic three-wide move to slice his No. 6 Ford Mustang through lapped traffic, eventually passing Edwards and taking the lead with 22 laps remaining.

Stenhouse looked as if he would cruise to the win, but the drama was far from over. A late mechanical issue forced him to slow at the finish line on the final lap. Edwards was unable to maneuver through the thick smoke and around the No. 6 car, violently slamming into the back of Stenhouse just short of the finish line, with the two crossing the line sideways, first and second, with severely damaged cars.

“I don’t think anyone’s finished one-two with two torn up race cars like that, so congrats to Jack (Roush),” said Edwards. “I hoped he would be out of the way when I got there and I would drive around him. I have to thank Fastenal for being a part of this. It was a huge day. It’s fun to come here and race in front of this crowd and a great race for Ricky even with his problem there at the end.”

All three Roush Fenway Ford Mustangs led in the race, with Edwards leading a race-high 109 laps. Stenhouse led 25 laps and Trevor Bayne, who started second – was strong early; leading seven laps. Bayne was running top-five when he was forced to pit with a loose wheel. Bayne finished 25th in the race.

With the victory, Stenhouse increased his Nationwide Series points lead to 12 points. Stenhouse and Edwards finished both Iowa races first and second this season.

Roush Fenway and the Nationwide Series return to action next weekend at Watkins Glen.

As we anticipate another exciting season in NASCAR, here is your guide to partnerships continued and new alliances formed in preparation for the 2021 season. This list will be updated as new information becomes available.
Read more
XFINITY Series

The 18-year-old grandson of NASCAR Hall of Famer and team owner Joe Gibbs will return for an additional 14 Xfinity Series races throughout the 2021 season.
Read more