Straight From The Glen: Saturday Wrap-Up 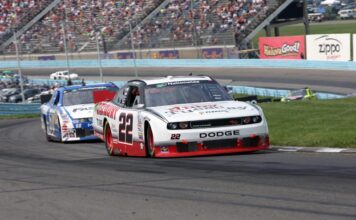 [/media-credit]It was a day for the Busch brothers today here at Watkins Glen International. Two track records were broke today here at The Glen, both by drivers with the last name Busch.

Kurt Busch had no intentions of running the NASCAR Nationwide Series Zippo 200 today, but when the doctor told Brad Keselowski to take a rest, he listened. Kurt got the call up from his team owner Roger Penske Wednesday Morning, and after he was called upon he delivered.

Starting with NASCAR Nationwide Series qualifying this morning, the Busch brothers dominated all on-track activities here at Watkins Glen International today. Kurt’s speed of 123.241 was good enough to take the top starting spot for this afternoon’s and paved the foundations of his win in the Zippo 200 here at The Glen. His lap also shattered the NASCAR Nationwide Series track record held by Marcos Ambrose. One-upped by Kurt by just one spot, Kyle laid down a lap good enough for him to also start on the front row in second.

Making the quick switch over to their Cup cars, the Busch brothers continued their domination of today’s racing. Kyle, (not to be outdone by older bother Kurt) would etch his name in the history books by breaking the NASCAR Sprint Cup Series qualifying record.

Kyle Busch’s lap of 1:09.767, the fastest qualifying time ever here at The Glen, was good enough to take pole position for the 220-mile race slated to go tomorrow at 1PM. His pole here at Watkins Glen marks his 8th of his career, and the first for him this season. The weather is not looking very cooperative at this point, but should the Heluva Good! Sour Cream Dips at The Glen go green tomorrow; Kyle Busch will bring the field to the green flag.

Sweeping the front row for the 17th Annual Zippo 200 at The Glen, the Busch brothers were less than willing to share the spotlight on Saturday afternoon.

Kurt wasted no time in flexing his muscles, jumping out to a two-second lead over his bother by lap 6. Kyle grabbed the lead for one lap after Todd Gordon made the call to bring in the #22 Ruby Tuesday/Discount Tire Dodge Challenger into the pits on lap 9. Kyle, in turn would have to pit, returning the lead to his big bother Kurt on lap 10.

The Busch brothers swapped the lead a total of seven times throughout the course of the 85 laps Saturday afternoon, but fuel mileage ended up determining who took home the trophy today here at The Glen.

Kyle Busch gained the lead on lap 56, and if the last quarter of the race played out the way the first three quarters did, he would have surely been short on fuel to make it the rest of the way. Kurt stalked his brother for about 20 laps, but never really had enough to pass him in the later part of the race. The Penske team knew the No. 18 car was running short on fuel down the stretch, and the word came through that Kyle was trying to conserve for the end. The No. 22 team in-turn put the heat on the leader Kyle Busch, forcing him to burn more fuel to keep the lead.

Kyle Busch would eventually bring his car down pit road around lap 76, relinquishing the lead to brother Kurt. Had Crew Chief Jason Ratcliff known that the caution flag would fly just 5 laps later, there’s little to no doubt that Kyle Busch would have remained on the track as the race leader.

The caution flag did fly on lap 81, forcing a Green-White-Checkered finish. Kurt Busch got away clean on the second and final restart, with his brother Kyle, Jimmie Johnson, and Carl Edwards all trying to gain position enough to dive-bomb the eventual race-winner in Turn 1.

Kurt Busch had this to say about the Green-White-Checkered finish: “I knew that it was going to be a good finish. On the restart at the end, all heck could have broken loose. I actually drove it in a little too deep; that right-front tire was cold. I just have to thank this crew for allowing me to step in, they were starting to call me “Buschlowski” because I was wearing Brad’s fire suit. Todd Gordon (crew chief) did an excellent job. This was a fast Dodge Challenger. I’m proud to drive it. Thanks to Ruby Tuesday, Discount Tire and Shell and Pennzoil for allowing me to come over here and have fun. It’s really neat to come over here and sit on the pole and win.”

Teammate and regular driver of the No. 22 Ruby Tuesday/Discount Tire Dodge Challenger, Brad Keselowski was enthusiastic for his replacement in Gatorade Victory Lane “We left our driver debrief and talked about the Cup weekend at Pocono, I walked up to Kurt and said, ‘Hey Kurt, I think it would be cool if you drove my car this weekend. I just don’t think that I can pull it off.’ He was like a kid in a candy store. His face lit up and I knew that he wanted to drive this car. I knew how bad he wanted to win and I’m glad to see his hard work and passion for the team pay off with a victory.”

Jimmie Johnson, driving for JR Motorsports brought his Jimmie Johnson’s Anything With an Engine Chevrolet home second, Joey Logano edged Kyle Busch out for third, and Carl Edwards rounded out the Top 5.

The No. 18 Z-Line Designs Toyota lead more than half the laps here today at The Glen, but driver Kyle Busch declined to comment following the pit strategy that did not play out in his favor. Brother Kurt’s win marked his third title in just twelve starts in the NASCAR Nationwide Series at The Glen. It is also the 19th Sprint Cup driver in the 23 Nationwide Races with a ‘Sprint Cup Regular’ winner.

It was a fantastic day here at The Glen and everyone here is praying to the rain gods to hold off so we can get the race in tomorrow. Stay tuned for more from Watkins Glen International…