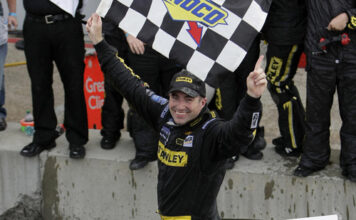 “I was so happy to have the good fortune to race for Penske Racing and drive the Dodge Challenger car this weekend. It was pretty quick.” Tagliani said. “I’ve very proud, very thankful for all the help I had from Penske Racing. It was great to drive the Hot Wheels Dodge this weekend here in Montreal.” [/media-credit]It was not an easy task for Ambrose to find victory lane at Montreal. Ambrose had to start in the back of the field because he was not able to qualify on Friday due to being at Michigan for the Sprint Cup Series race and arrived in Montreal less than 30 minutes before the race started.

Carl Edwards, Ambrose and Trevor Bayne all arrived via Edward’s helicopter and a speedboat ride along the Olympic rowing basin to the garage. Edwards and Bayne also started in the back. Substitute drivers Billy Johnson (Edwards), Owen Kelly (Ambrose) and Michel Jourdain Jr. (Bayne) qualified for the drivers.

On lap 44, pole-sitter and local favorite Jacques Villeneuve gets off course and then slams into the side of Ambrose on the restart. Villeneuve had to pit two laps later after also making contact with Elliott Sadler.

“On the restart with Marcos, I got caught sleeping. Instead of leaning on him, I gave him too much room, ended up in the gray and lost control of the car. I should have been more aggressive. Our Dodge was very fast. It’s disappointing. We had the car to beat.” Villeneuve said.

This could be the final race in Montreal. The government turned down a request for $500,000 in funding.