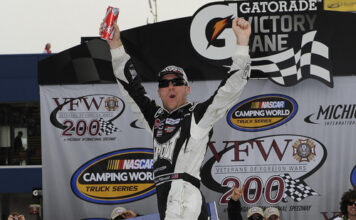 [/media-credit]This was Harvick’s second consecutive win in the truck series and the 11th of his career.

“This has always been a fun racetrack for us, but honestly, as a program, we’ve had some struggles here over the years. Today, we were really loose at the beginning of the race and the guys did a great job making huge changes to the truck to get it to where I could drive it.” Harvick said.

Mark Martin was leading during the restart on lap 89. Martin and Parker Kligerman got together as Kligerman got loose. Kligerman clipped the rear of Martin, sending him spinning and pole-sitter Matt Crafton crashed into him. Austin Dillon was also involved, he T-boned Kligerman’s truck.

“We had a run on the 2 (Kevin Harvick) down the back, but he can cut through the center better than we could with our Tundra. Great points day. How about Miguel, great run for him and his Stemco Duroline Tundra as well.” second place finisher Peters said.

“Today was a great day for us. We had an awesome truck — this is the same truck we used at Dover with a new body. These guys did great. We did small adjustments. I was on the longer runs a little bit snug and then I was perfect. I couldn’t get (Kevin) Harvick on the second restart but I went and raced with him. I’m really proud of my guys on this Stemco-Duroline Toyota Tundra.” Paludo said.

Johnny Sauter leads in the series standings over James Buescher by five points.