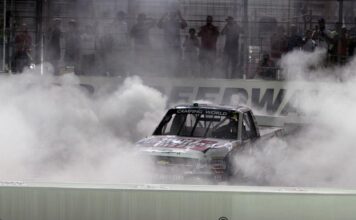 [/media-credit]Harvick held off Johnny Sauter in the final laps for his third consecutive victory in the Truck Series.

Ron Hornaday started third but got loose exiting off of turn 2 and slid into the inside wall, ending his night early.

On lap 51, Chris Jones driver of the #87 was turned into the outside wall by Jake Crum, #01. Jones did a little retaliation bump before bringing it into the garage for repairs. “I got plum run over.” said Crum. “I don’t know if he ran out of talent or brains.”

On lap 62, Crum was caught up in a multi-truck crash in turn 4 after Ricky Carmichael and Max Papis get together. Crum slammed into the side of the #9 of Max Papis, sending both of them to the garage.

On lap 99 during the restart, Elliott Salder spun Kyle Busch into the outside wall exiting turn 2. Busch suffered severe front end damage but stayed on the track until Sadler made it back around the track. As Sadler tried to make the move around Busch, Busch pushed him up high and spun him out in retaliation. Busch also clipped him in the rear during the spin.

“I honestly think his sponsor didn’t see that I was on the outside of him.” Sadler said.

Busch admitted that he took Sadler out and accused Sadler of purposely taking him out. Busch made a reference to the person that pays Sadler’s paycheck, referring to Kevin Harvick Inc (KHI).

“Where does his paycheck come from? We were racing earlier tonight and I pulled a slide job on him and he ran into me three times after that. Then got clear of him for a while and on that restart there I was trying to slide him and get up to the top. The spotter said I was clear and I was clear at the time. Maybe I was too late. He wrecked us and I’m not going to put up with it.” Busch said.

“Shows how smart Kyle Busch is. Elliott is not even driving for us tonight. We can drive as dirty as he wants.” Harvick said in victory lane.

On lap 144, #39 Ryan Sieg and #51 Josh Richards get together as Sieg tried to make a move low. Also #32 Blake Feese and Papis were also involved.

Sauter increased his points lead from five points to seven over Buescher in the series standings.