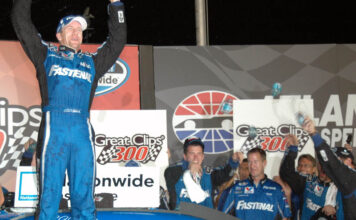 With about 20 laps to go Carl Edwards made the pass for the lead by getting past Kevin Harvick but Ricky Stenhouse Jr. was coming up from behind at the same time making it to fourth by the time his Roush-Fenway team mate was in the lead. Stenhouse closed in a little but could never make it by him.  With less than ten laps remaining Stenhouse was challenged by Kyle Busch for second and got by Stenhouse as Edwards checked out.

Edwards led 101 of the 195 laps on the steamy Atlanta night. It was his sixth Nationwide Series win of 2011. It almost wasn’t to be as Edwards was penalized for taking equipment out of the pit stall when he left with the air gun and hose. However, Edwards was fast and charged to the front.

Edwards said in victory lane, It was a big week for Fastenal with the announcement we made.” He also psoke about a visit to a cancer camp,  “I was inspired by going to the Aflac cancer camp, he said. He then mentioned the racing,  “I’ve got a great team. We raced as hard as we could. It was a blast. We raced hard and we raced clean. I raced with Kyle (Busch), and Kevin (Harvick) and Kasey (Kahne) and it was all good racing.”

Second place finisher Kyle Busch said, “We had a good car, just not good enough. Busch then spoke about their engine package saying,  Hated it that we didn’t have enough under the hood for those Fords.”

The final restart was caused by the wreck that involved team mates Just Allgaier and Reed Sorenson that saw Sorenson get clipped in the left rear by the hard charging Allgaier sending Sorenson up into the side of Daytona 500 winner Trevor Bayne who was in the  back due to a pit stop after challenging for the win.

Sorenson made it a point to say that he would find Allgaier after the race. Sorenson said, “It’s kind of uncalled for to wreck your teammate. I will find him after the race. It will be between me and him.”  He was clearly upset.  “I feel horrible, you don’t ever want to crash anyone, especially your team mate”, Allgaier said after the race, “No words can describe it, I want to talk to Reed, it was my fault. Took points way from them they didn’t deserve.”

Ricky Stenhouse finished third followed by Kevin Harvick and Kasey Kahne. There were eight different leaders and six caution periods for 27 laps. The margin of victory was just under.7 of a second. Ed Coombshttp://www.sportshooter.com/coombse
Ed began covering NASCAR for the former Gater Racing News regularly in 2000. He began working with Speedway Media in 2003 by supplying exclusive photos from the races covered. Currently he is the Editor and Assistant Publisher of Speedway Media. He also manages staff and credentialing. With the closing down of Gater News after nearly 50 years he hopes to become a more regular contributor at Speedway Media as a writer and photographer. My Twitter name is @coombsed feel free to follow me I am a member of the National Motorsports Press Association.
Previous articleBusch Leads Dodge in NSCS Qualifying at Atlanta
Next articleEdwards dominates Great Clips 300