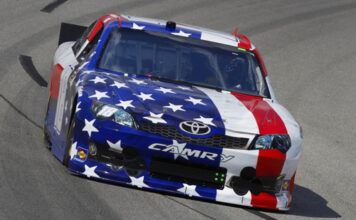 If there is a NASCAR race being run in Richmond, you will generally find me in the Media Center moonlighting from my “day job.” It allows me to put on a different hat for a couple of days and see the world in a completely different light. Writing about NASCAR is not only a passion, but, at times, a much needed distraction from my full-time career. I am a Paramedic with a background in firefighting. Rarely do my worlds collide, but this weekend, commemorating the tenth anniversary of 9/11 at the track, they did just that.

I listened to drivers share their personal accounts of where they were on Sept. 11, 2001. Denny Hamlin was putting an exhaust on a new car, Kurt Busch was testing in South Carolina and Ryan Newman was listening to a waterproof radio that hung from the shower head while he was bathing that morning. You can’t help but be transported right back to where each of us was that day.

I lived in Arlington, directly across from the Pentagon, I watched it all play out in real time before my eyes. Not knowing what could possibly happen next, I choked back tears as I said my “good-byes” and “I love yous” to my parents on the phone that morning. It seems almost melodramatic now but at the time I was terrified and truly unsure if I’d make it out alive. The anniversary brings back painful memories for me. It remains the worst day of my life. [/media-credit]Today in the Media Center I was reminded of loss, as Mary Siller Scullin recounted her brother’s life, a New York Firefighter who died on Sept. 11, 2001. Stephen Siller was off that day preparing for a game of golf with friends when he heard the news that the World Trade Center had been attacked. Instinctively, he grabbed his gear, threw it into his truck and made his way towards the burning towers. When he arrived at the Brooklyn Battery Tunnel, it had already been closed to vehicular traffic, so Siller put his 75 pound gear on his back and ran through the tunnel to the towers to help  rescue his fellow New Yorkers.

Siller lost his life when the towers collapsed leaving behind his wife, five children and five siblings to carry on his memory and share his story. The Stephen Siller Tunnel to Towers Foundation, was started by his brother Frank to honor his fallen sibling. It is a charitable organization set up to follow in the footsteps of this true American hero.

One of the primary missions of the Foundation is to help military members who have been seriously injured and sacrificed the quality of their lives in the line of duty.  The Foundation is currently in the process of building “smart homes” for three servicemen who suffered the loss of both arms and legs during combat but lived to share their stories.

Two of the three gentlemen were on hand, US Army Specialist Brendan Marrocco and USMC Corporal Todd Nicely. Scullin earmarked the donation to be used for the construction of a customized home for Nicely. Marrocco’s home was finished in June.

“It’s not every day that you get to do something so important for America’s finest heroes on an anniversary that’s so meaningful to our country,” said Hitchcock. “I’m proud of our team, we worked extremely hard to put the Honoring Our Heroes program together and we hope this donation and the funds that follow it will go a long way towards finishing Todd’s new home. “

The check was the first installment of the proceeds from Lionel NASCAR Collectibles “Honoring Our Heroes” die-cast program.  Eight drivers will run a special “Honoring Our Heroes” pain scheme this weekend. Each of those cars will honor those who lost their lives in the 9/11 attack as well as our nation’s military heroes. During the Nationwide race, look for the special paint schemes on the cars of Danica Patrick, Carl Edwards, Trevor Bayne and Ricky Stenhouse Jr.. David Gilliland, Greg Biffle, Tony Stewart and Jamie McMurray will their “Honoring Our Heroes” cars on Saturday night’s Sprint Cup race.

“When we first talked to Lional NASCAR about the possibility of drivers racing with out Foundation’s name on the cars, we had no idea it would be this big,” said Scullin. “Today, as I see these drivers and all these cars I am overwhelmed with emotion. On September 11, 2001, my brother Stephen sacrificed his life for his fellow Americans and he would be honored to know that his legacy is making such a difference in the lives of young men like Brendan and Todd.”

After the presentation of the check, Scullin presented each of the drivers a small piece of metal from the World Trade Center stamped with the words “W.T.C. 9/11 Never Forget” and the number 343 in honor of the 343 firefighters who died that day.  She reminded the drivers that the metal was special because her brother’s body was never recovered, so each piece of that metal held a piece of Stephen’s spirit and hoped that it would help to keep each of them safe.

Each of the drivers acknowledged the “gift” with great humility and thanks. They not only recognized the lives lost, but applauded the fact that even though all those firefighters lost their lives running into the face of danger, the disabled servicemen who sat before them knew that they could face death or dismemberment but they still signed up to simply “do their jobs” and if given the chance would do it all again.

It is refreshing to see that our NASCAR heroes have heroes of their own.