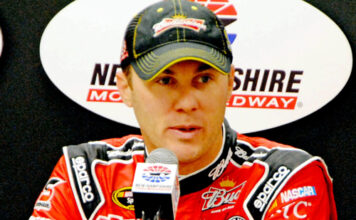 [/media-credit]The pithy phrases flowed from the beginning of the interview session when the point’s leader addressed his position in the Chase pack, which is at the top of the heap by seven points over last week’s race winner Tony Stewart.

“Now, it’s like us against ourselves,” the point’s leader said simply.

“Anything that you can do that’s better than everyone else is a good thing,” Harvick said. “You don’t want to beat yourself the first week. And you don’t want to do anything to take yourself out of the hunt.”

“It was a good start,” Harvick said. “We feel good about the way it all shook out.”

Harvick then discussed his special paint scheme, calling attention to the Global Be(er) Responsibility Day observed by all 1500 Anheuser-Busch employees across the country to encourage the use of designated drivers. For this promotion, Harvick’s pithy phrase was simple, “Designate a Driver.”

“All the Anheuser Busch employees will be going to restaurants and bars to spread the importance of everybody being responsible when they’re having a good time,” Harvick said. “Designate a driver to take care of the people on our roads and ourselves.”

“It’s a great initiative and I’m glad to be a part of it.”

Harvick then turned his attention to his team owner’s comments about dethroning five-time champion Jimmie Johnson.

On that subject, Harvick said simply, “Sometimes he gets excited.”

“I don’t know that that was the absolute right thing to say in public,” Harvick continued. “All in all, Richard is very confident in us as drivers and feels like he spends the money to be competitive in a championship.”

“He just wants to win,” Harvick continued. “With Richard, it’s all about winning. He wants to be up on that stage again and we want to be right there with him.”

As with the many drivers that followed in the media center, Harvick was asked about his fuel mileage saving techniques, especially at last weekend’s race.  Would he mind sharing his tips for saving fuel?

“Yeah…..right,” Harvick said, followed by a moment of silence and then some chuckles, as the media moved quickly on to a follow up question.

“I can’t speak for everybody else because I don’t know what they do,” Harvick finally shared about the fuel mileage question. “A lot of what we do is preparation. A lot of it is the crew chief telling you soon enough to make a difference.”

When the fuel mileage talk continued, Harvick shared this pithy recommendation for the benefit of all of his fellow competitors.

“That’s the hard part about our sport,” Harvick explained. “It’s not like you have a fuel gauge.”

“You have to do what you think is right as far as the amount of gas you save and the techniques you use,” Harvick continued. “I felt like I had done an OK job of saving gas but you’re never really confident. It’s just one of those things that you have to go by feel and hope it works out.”

When asked why Harvick seemed so calm this year during the Chase championship, Harvick again said simply, “It’s easier.”

“That’s really the bottom line,” Harvick continued. “Gil (Martin, crew chief) and the team have a lot to do with that.”

“He handles it,” Harvick said. “When we’re screwed up, he has an answer as to what we’re doing.”

“He lets me be myself,” Harvick continued. “When I get mad and get frustrated in the car, he lets me yell on the radio. Then it’s over with and we move on.”

“When you have people around you doing their job, I can be a lot calmer.”

While Harvick and company are all doing a great job, at least in this early stage in the Chase race, the Bakersfield, CA native acknowledges that every track in the remainder of the Chase is a potential land mine.

“As you go to every race track, you never know if you’re going to run good or bad,” Harvick said. “They can all be land mines.”

“There’s not a specific race track that sticks out and says this is going to be a disaster,” Harvick continued. “So, I don’t have any specific concerns.”

So, what is Harvick’s approach to this weekend’s race at Loudon, where he has earned one pole, five top-fives and 11 top-10 finishes in 21 starts?

“I’m not trying to be an ass, but to us it’s just another race,” Harvick said. “They all pay the same points.”

“Our first goal is to win,” Harvick said. “Our second goal is to get everything we can. When we come here, we expect to win.”

Harvick acknowledges, however, that the ‘Magic Mile’ is a track that can be just plain tricky in its approach.

“It’s just one of those deals where there are so many things that can bite you,” Harvick said. “This place if you get behind late, you’re not going to make it up.”

“There’s definitely a track position game here that comes into play,” Harvick continued. “But all in all, we come with a car that’s won on two flat tracks this year.”

“We don’t expect any less than that every week.”