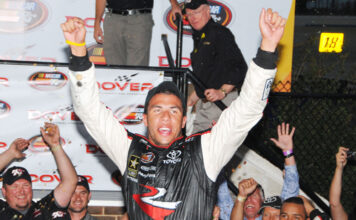 There were dueling victory lane celebrations after the final NASCAR K&N Pro Series East race, the Dover 150, at the Monster Mile. [/media-credit]Darrell Wallace, Jr., driving the No. 6 US Army Toyota for Revolution Racing, scored his third win of the season in the final race, while Max Gresham, fielding the No. 18 Live Oak Plantation Toyota for Joe Gibbs Racing, finished off the season as champion.

Although one a race winner and the other a champion, both drivers were equally emotional about their victories. The win was especially powerful for Wallace due to a loss he suffered in his personal life last weekend.

“It was an emotional win for me, especially losing my uncle this past Saturday,” Wallace Jr. said, “It was tough.”

“I put his name over my name on the door,” Wallace continued. “He was riding shot gun with us and he’s the one who put us in Victory Lane.”

Wallace not only enjoyed the racing at the Monster Mile, but the trophy too.

“This race was fun,” Wallace said. “I love this track.”

“Dover is my favorite track, not just because I won but because it teaches you a lot, how to pass cars, go fast and turn laps,” Wallace continued. “But I’m more tired from carrying this thing (Miles the Monster trophy) around than racing out on the track.”

Wallace is just seventeen years old, with his ‘big 18th’ birthday coming up next Saturday. Under the tutelage of Andy Santerre, former Busch North champ, and with the support of the US Army as sponsor, the young driver has also been responsible for half of the wins for Revolution Racing this past season.

“Revolution Racing and the US Army not only got us to Victory Lane today, but also got us three wins and three poles and getting us to the race track each weekend we had a race,” Wallace Jr. said. “It just goes to show how ‘Army Strong’ we are.”

As strong as Wallace was, there was one stronger car and driver in the field, at least as far as the championship. Max Gresham, who ran every lap of the season, was officially crowned the K&N Pro Series East champ.

“This has been the best season I’ve ever had,” Gresham said. “It will be a good one for the records book for a long time for ourselves.”

“You can’t ask for anything better than that,” Gresham continued. “It’s been a great year for us.”

“To be a NASCAR champion is the biggest thing and pretty much the only thing I’ve ever wanted to do when I started racing,” Gresham said emotionally. “And now I am.”

Crew chief Bryant Frazier seconded his driver’s assessment of the winning season. In addition to this championship, Frazier is also best known for being Tony Stewart’s first crew chief.

“Wow, this is an awesome day,” Frazier said. “It’s been something coming all year.”

“Max has done an excellent job,” Frazier continued. “It’s a testament to the Gibbs and everyone who works throughout this sport.”

Steve Desouza, Vice President of Nationwide and Driver Development for Joe Gibbs Racing, also spoke of his pride for the driver, as well as the pride he had for the team in Gresham’s K&N Pro Series East championship.

“Speaking on behalf of the Gibbs, what an honor to be part of this Series,” Desouza said. “It’s been a great development series for us.”

“We’re really proud of Bryant and Max and the job our entire group has done,” Desouza continued. “Max is an incredible talent and our guys have worked very hard for the championship this year.”

Gresham’s major competition for the championship, Brett Moffitt, looked like he might have a chance to pull off the upset, leading the race in the waning laps. Moffitt, in his No. 00 AAA/Michael Waltrip Racing machine, however, blew a tire and hit the wall to finish 21st.

“It was unfortunate for him that he blew that right front tire but good for us,” Gresham said of Moffitt. “As soon as it happened, there was a big sigh of relief and we just slowed down and finished third.”

Both Gresham and Wallace Jr. acknowledged that not only are they winners, but they have also both learned many lessons throughout this race season. And one of those lessons is that patience is a virtue.

“I think the biggest lesson that I’ve learned this year is patience,” Gresham said. “It’s definitely played a lot into finishing every lap and finishing top five and top ten as much as we did.”

“Not letting my nerves get the better of me and staying calm, being patient and not pushing the issue was the key.”

“The lesson that I’ve learned is to not get in over my head like in situations like today,” Wallace Jr. said. “Just a lot of patience, car control and everything there is to racing.”

With the race win and championship now in their rear view mirrors, both Wallace Jr. and Gresham took a moment to think about their futures. But for both winning drivers, that future is uncertain at present.

“Watching Max since he has been with us, he has learned to race well,” Desouza said of Gresham’s future. “I would venture to say that you’ll be seeing him in Nationwide and more than likely in Cup in the future.”

“He’s done a great job and he’s done a nice job of bringing this group together and applying it on the race track.”