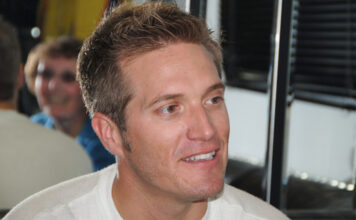 [/media-credit]On the track, Yeley is the designated driver to get the No. 38 Ford team of Front Row Motorsports not only into the race, but also into the top 35 in the point standings by the season end.

And off the track, Yeley is participating in a special promotion entitled, “J.J. is My D.D.”, encouraging all to “Drive Sober, Arrive Alive” by using a designated driver.

For Yeley, his primary focus this race weekend as the team’s designated driver is getting the car into the show. This will be especially daunting due to the fact that Yeley wrecked his primary car in practice, with a too close encounter with the Monster’s wall.

“There are a lot of things that make Dover unique and there is a reason they call Dover the ‘Monster Mile,” Yeley said. “The straight-aways at this race track have more banking than other tracks where we go.”

“It is by far the fastest race track we go to,” Yeley continued. “What makes this place the toughest is the transitions from the corners to the straight-aways.”

“That’s what bit me in practice,” Yeley said. “As I exited Turn Two, the car jumped sideways and there was no time for recovery.”

“They call it a self-cleaning race track but it’s more a gobble them up and spit them out track.”

Is Yeley worried about having to be the designated driver of his back-up car? While he might be confident, he also admitted that it makes for an even more unnerving situation.

“The back-up car is actually going to be better,” Yeley said. “That’s the beauty of having a multi-car team.”

“Me and David (Gilliland) have a compatible driving style,” Yeley continued. “So, I’m not worried about jumping into a back-up car. Most likely it will just be a lot of fine-tuning.”

“We will have to make it in on time,” Yeley said. “But we should easily make the race based on my practice averages.”

“It’s still very difficult because you cannot afford to make any mistakes,” Yeley continued. “The difference between who makes the race and who goes home is the matter of a thousandth of a second.”

“It always makes you nervous, no matter if you’re a veteran driver or one with a short amount of experience,” Yeley said. “I talked with Bill Elliott last year and he even got nervous when he had to qualify in and perform under those circumstances.”

“The team has to prepare the car as good as possible and I as a driver cannot make any mistakes.”

Yeley has a singular focus as the team 38 designated driver.

“The goal for this weekend is to gain points on the No. 71 team,” Yeley said. “We’ve been making up an average of 5-7 points per race.”

“It makes 2012 so much easier,” Yeley said. “Those first five races, you don’t have to worry and it makes getting sponsors so much easier.”

“All we can do is go out there and do our best,” Yeley continued. “This is a particularly tough race track but I think we can capitalize.”

Yeley’s other Designated Driver duty is even more critical, as this one is designed to save lives. Yeley is partnering with the Delaware Office of Highway Safety to call attention to the dangers of drinking and driving.

“When I was here in the spring race, I worked with the Delaware Office of Highway Safety on their seatbelt promotion,” Yeley said. “I had some friends who were killed in accidents where they were not wearing their seat belts so we just built that relationship.”

“Anytime you can have a sponsor, it’s a fantastic thing but when you can promote such a great cause, it is perfect.”

The Delaware Office of Highway Safety is also thrilled to be working with Yeley yet again.

“The Delaware Office of Highway Safety is very excited to partner with J.J. and Front Row Motorsports to promote the Drive Sober message,” Jana Simpler, Director of the OHS, said. “NASCAR is a very popular sport with lots of loyal fans.”

“We think that promoting Designated Driving and a Drive Sober message with a NASCAR racing team will create more buzz among 18- to 34-year old males about driving sober and arriving alive.”

Both Yeley and the DOHS agree that the partnership between their office and Yeley is the best way to reach a maximum number of people, especially in that targeted age group.

“When you have over 100,000 people at a race, most of them having a good time, it’s very important to pass along the “Drive Sober, Arrive Alive” message,” Yeley said. “You have so many people show up at these races that sometimes people forget the fact that they have been drinking all day, which just magnifies the alcohol.”

“Having a designated driver because usually there is so much traffic leaving the races, getting caught with a DUI is not only costly but very dangerous.”

For Yeley, being the designated driver is not only a passion, but it is personal.

“The previous team that I was with, one of the sponsor’s had a niece that was almost killed by a drunk driver six months ago in Dallas,” Yeley said. “She almost lost her life but she was one of the lucky ones.”

“Unfortunately, there are a lot of people who don’t give it a second thought,” Yeley continued. “That is what this promotion is all about.”

Yeley will actually be participating as a designated driver for a fan this race weekend. He will be traveling with a contest winner, Andy Anderson, to several local pubs as his DD.

“We will start signing autographs at a local pub and then travel to another bar at Dover Downs,” Yeley said. “Andy Anderson was the lucky recipient. He will have more than a good time than I will as I won’t be drinking obviously.”