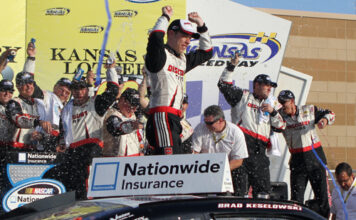 It was a near perfect day for Brad Keselowski, a front row starting spot, a car with an excellent feel from the beginning. When the green flag dropped it became evident that it was a perfect car too. [/media-credit]As a matter of fact if it hadn’t been for a miscue that caused him to stall the car on pit road and come out of the pits in 14th position; it would have been a perfect day. But  the miscue didn’t slow him down for long, as he made an incredible run from 14th to 1st in 6 laps. He came out of the pits for the last time in 4th spot.

If Carl Edwards thought on lap 180 on the restart in front of Keselowski that he had the advantage, he didn’t think it for long because before lap 190, Keselowski’s Discount Tower Dodge would again be leading the way.

Keselowski had the dominant car and lead four times for 173 of the 200 laps run. It was his fourth win and 17th top-10 finish in the season.

Keselowski who compares his commitment to the NNS to helping family keep jobs and be successful, showed why it is he is the current reigning champion of the series and why he as won the last 2 races at Kansas. “Once you win at a track and figure out what you need it makes it easier to go back with a better car everytime. But this was a perfect car. And I was doing everything I could to not screw it up. ” said Keselowski. “It’s just an unbelievable car and unbelievable day and to Nationwide and all the fans, thank you so much. It’s a privilege to get to do this.”

Edwards, also knew that Keselowski had the perfect car. “I just think he didn’t realize how fast his car was and I think he was maybe trying to just try every little trick he could to make sure he won. It is my opinion he didn’t have to do that.” stated Edwards who posted his fourth top 10 finish in seven races at Kansas, and his 23rd top 10 finish in 2011.

Ricky Stenhouse Jr finished 5th and maintained the series points lead. “It was and up and down day. We didn’t start out very good, not like we wanted to or normally do. We were on the loose side, on the tight side and couldn’t hit it in the middle like we needed to. To battle back from three pit road issues that we had, I stalled it once, got a penalty for speeding and had a slow stop. To still come back and run top five is not too bad. ” stated Stenhouse Jr. after the race.

All in all the race had it’s moments. There was the side by side race between Edwards and Keselowski that could easily have ended in disaster. Instead the talent of both drivers brought them through to the end. There was the dust up between Aric Almirola and Brian Scott that ended with Scott confronting Almirola on pit road after the race. But for the most part the race was a snoozer.

From the drop of green flag it was obvious that the Penske Dodge was the dominate car. At one point Keselowski had a four second lead over second place Edwards. Though there was some hard core racing going on in the back of the pack for the most part it was a race of conservation. Conservation of car. Conservation of points. And maybe even conservation of sanity.