Opinion: Elliott Sadler’s Solid Season Has Impressed but Not Enough 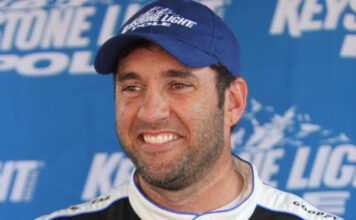 When Elliott Sadler and Kevin Harvick announced their partnership for the 2011 Nationwide Series it was supposed to be the beginning of the Emporia, Virginia native’s rebirth. Instead almost a year later it has been nothing but underwhelming. [/media-credit]Sadler left behind 12 years of racing in the big leagues for a new home and hopefully a new legacy. A NASCAR rule change before the start of the season helped Sadler become a preseason championship favorite and while he’s in the middle of the fight, he hasn’t won a race yet. Instead the No. 2 OneMain Financial team is relying on his four poles and 21 top 10s to guide them to the finish line.

Those statistics are nothing to sneeze at, being among the best of the NNS regular drivers and those competing for the championship. Those drivers though, aren’t trying to prove to everyone that he deserves a second chance. Those drivers don’t already have years of experience under their belt. And so, when it comes to Sadler, more is constantly expected, especially this year.

Of course Sadler might consider winning a race to be icing on the cake because even while losing, he’s winning. It’s unlike his career in Sprint Cup where he was known as the lovable loser. His personality attracted others, not his statistics. Running the M&M’s car Sadler was the perfect driver, fun and happy, great with the fans and the media, but on the track there wasn’t much.

There were a few exciting moments though, but none that Sadler and his fans would have preferred. Like flipping more often than he finished at Talladega. Then came the 2004 season where he finally rose to his potential and won two races, qualified for the Chase and finished ninth in points. On the other spectrum though, was the scary incident at Pocono last season. Sadler was collected in Jimmie Johnson and Kurt Busch’s mess and hit the guardrail and dirt mound behind it head on.

He jumped from team to team – Wood Brothers, Yates, Evernham and Petty – but it didn’t change much. Sadler was just unfortunately became one of the back runners, seeing the leaders only when they lapped him. Over time the feeling of just being happy to be a Cup Series driver wore off, on Sadler and everyone else.

Earlier this season he revealed that he never found himself in a position where he had a team that believed in each other and wanted to succeed. Or did he have a team owner who would so anything to win. Now though, he’s found one with Kevin and Delana Harvick.

So, while we may be expecting more from Sadler, he’s just enjoying the ride. No longer living on the edge of a cliff waiting for the last straw to push him over. Now getting TV time for all the right reasons by running well and winning fans over again not because he’s an underdog.

Maybe that’s why the expectations where so high entering the season. Pundits wrote about his eventual rise to the top, contending for victories and finally being a leader. The team, the attitude and the opportunities were at the level they should be and in place for Sadler to become a star again. It’s why after 30 races Sadler should have wins under his belt and more than a best finish of third on three occasions. Or led more than 146 total laps.

These aren’t just our expectations though; Sadler knows that he needs to win races. Not just for the championship effort with five races remaining but to validate his move from the Cup Series down to the Nationwide Series. Having already removed the “also ran” category that had haunted him for years, as well as proving he can be a championship driver, winning, oh how winning would make everything better.

Winning is what Sadler came to the NNS to do. Not run around and earn a paycheck, Sadler wanted to have fun while doing what he loves and that’s easy to respect. Except, this is a business where it’s about winning and we’re still waiting for the team to pull through the gates and spray the champagne.

And as the season continues to drive closer to its conclusion, eyes will continue to be on Sadler. He would like to one-day return to the Cup Series but under what he calls the right circumstances. The right circumstances for all of us with expectations, hopefully it comes after Sadler has risen to the top of the NNS series with some wins and even a championship.