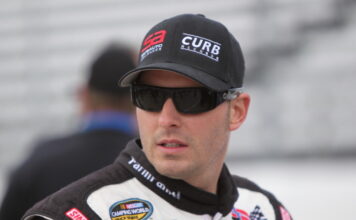 [/media-credit]Although many may consider him an underdog, Sauter definitely wants no one to count him out of championship contention for one simple reason. The 33 year old Wisconsin native is simply following the ‘Kulwicki path’ to glory.

“I’m going to use the Alan Kulwicki approach to his championship run in ’92,” Sauter said. “No one even considered him to have a chance but by the end of the day, he was champion.”

“You can’t listen to everybody and what they say,” Sauter continued. “We just have to keep racing hard. Probably some things are going to have to happen, but you never know what will happen.”

Sauter certainly did not know what was going to happen to him last weekend in Talladega. The race weekend started off rocky for the driver, getting hit in the left eye with a piece of debris shortly after practice began.

Sauter was then cleared to race, but had to start mid-pack after experiencing some transmission problems. When he and his teammate Matt Crafton dropped to the rear of the pack to try their hands at some tandem racing, they both went for a spin after the car in front of them blew a tire.

“It was brutal,” Sauter said. “We were playing the strategy of riding around in the back seeing who was going to crash and nobody did, except for us.”

“It was terrible,” Sauter continued. “We were back there doing our own thing trying to run the tandem deal. The guy in front of us cut a tire down and Crafton’s initial reaction was to turn left. When someone was tucked up behind him like we were, it had a bad outcome.”

Yet even after being three laps down, Sauter remained focused and in the hunt. He was able to rebound to finish in the 15th spot.

“When we originally wrecked, I thought that we were in trouble now,” Sauter said. “At one point, we were two laps down and got in position to get our laps back. We had a truck capable of running in the top ten because I pushed Brendan Gaughan all the way up to the front.”

“That was a solid effort,” Sauter continued. “Obviously I hate the way it turned out through nobody’s fault. But we’re still in the game.”

After surviving one of NASCAR’s fastest, most sweeping tracks, Sauter was excited to put Talladega in his rear view mirror and head to the short track at Martinsville. The track known as the ‘paper clip’ was the site of not only a victory in the spring for the driver, but also the birth of his second child, who arrived right after the race.

“It’s obviously a fond memory, winning the race the way we did, passing Kyle Busch on the last few laps,” Sauter said. “Obviously the birth of our baby girl, it made you feel good.”

“It’s a feel good race track for me,” Sauter continued. “But I’ve been racing long enough to know that was six months ago.”

For Sauter, his race at Martinsville this weekend was all about track position, as well as staying out of other competitors’ way. In spite of tempers flaring often, Sauter was able to bring his race truck home right where he started the race, in fourth place. This was Sauter’s tenth top-5 finish this season.

“Ultimately, it all worked out,” Sauter said after the race. “We found our way to the front. This was fun racing and anytime we see Martinsville on the schedule, I’m a happy guy.”

Sauter is also excited about the final two races, one at Texas and the finale in Homestead. Sauter has a good record in the Lone Star state, having finished second in both of last year’s races, as well as leading 56 laps in the spring race before receiving a late race penalty.

“I think we can go there and win the race,” Sauter said of Texas. “We’ve run really well there.”

“We had the truck to beat there but had some trouble in the pits and still finished second,” Sauter continued. “We did everything right and in my mind we won the race.”

Even with his good run at Martinsville and hopefully another at Texas, Sauter is convinced that, just like during Kulwicki’s run, the championship will be decided  in the finale at Homestead, where the driver has top 10 finishes in two of four starts.

“I hope it does come down to Homestead,” Sauter said. “That’s what I’ve been saying all year. I think it’s going to.”

Interestingly enough, with two young guns in front of him and the wily veteran Ron Hornaday now tied with him, Sauter has no interest whatsoever in his competition. In fact, he almost relishes the role of underdog and flying under the radar.

“To be honest, I’m not looking out for anybody,” Sauter said. “I’m more focused on what we’ve got to do.”

“Obviously, Hornaday has found something the last month that has got him back on track,” Sauter continued. “But I’m not really concerned about anybody.”

“I think we need to go to the race track and execute and do our own thing and accumulate points,” Sauter said. “Everybody is focused on Dillon and Hornaday the way that they’ve run.”

“I probably would look at us as underdogs right now,” Sauter continued. “That’s fine with me. I don’t need the attention.”

Sauter may not need the attention, but there would be nothing more meaningful to him than to be hoisting that trophy over his head in Florida during the championship race weekend.

“Man, that would be something,” Sauter said about a championship win. “I probably wouldn’t even know until it happened what I’d feel like.”

“Coming from a racing family, that would be a huge accomplishment not only for me, but for my family,” Sauter said. “I’d probably be speechless for a little while. I’d have to just take it all in.”

But for now, with three races in the season left to go, Sauter is just staying the course, as well as hoping to emulate NASCAR champ Alan Kulwicki.

“You just have to keep digging,” Sauter said. “That’s all you can do.”

SM Staff
Previous articleBrad Keselowski Opens Up About Integrity, Ethics and Where Penske Stands
Next articleFederal-Mogul’s Champion® Brand to Offer $100,000 in Racing Sponsorships Through Web-Based ‘Search for a Champion’ Contest