Brad Keselowski Opens Up About Integrity, Ethics and Where Penske Stands 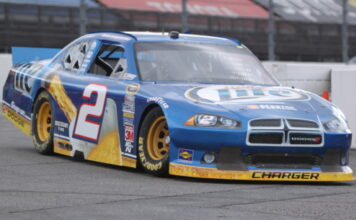 With news that crew chief Chad Knaus might be up to his old tricks, opinions have run rampant around the NASCAR atmosphere. [/media-credit]Friday at Martinsville those opinions were expanded upon when many were asked about their views on integrity and ethics in the sport. Brad Keselowski, never one to back down from any question, called it as he saw it by saying that NASCAR had a rough week on the ethical side of the board.

“I think every person, every driver, ever team, car owner, whatever it might be, has their own code of honor,” said Keselowski. “It’s something that I place very high; that’s why I’m driving for Roger Penske. I think you can look at things like that and you can see who a driver picks to drive for and you can kind of get a mindset, so to speak, of how they feel about it.”

Keselowski journey to the Sprint Cup Series is well documented. Spoted by Dale Earnhardt Jr. in late 2007 he joined his Nationwide Series team for two years where he won his first few races and finished top five in points. But Keselowski then went to Penske Racing when it didn’t seem that Hendrick Motorsports would be able to fit him into their NSCS lineup.

The Michigan native has fit in well with the captain’s team and is currently among the fight for the 2011 Cup Series championship after qualifying for his first Chase. Something of importance for Keselowski is that he and Penske have the same belief when it comes to winning races. It’s better to succeed and win by a company’s hard work than by playing outside the lines.

“There have been times when I’ve had conversations with Roger and ask him why are certain things not done on the car and he’s told me point blank, ‘Hey, this is something that is a little grey and I don’t live in the grey area,’” Keslowski revealed.

He went on to say that Penske refuses to run his teams with that philosophy and Keselowski wouldn’t have it any other way. When they take the checkered flag on Saturday and Sunday afternoons, fans, teams and others alike won’t be able to question it. There won’t be any doubt, discredit or asterisks next to a Penske victory in the record books.

Says Keselowski, “I have a tremendous amount of respect for that. It’s easy to fall into temptation of sorts to push it a little bit harder. I think we all come back to it sometime, whatever individual code we have, and mine is a reflection of who I drive for. That can be tough. It can certainly be tough.”

This season Keselowski has won three NSCS races weren’t discredited in any way. In fact, they were embraced because of Keselowski’s performance by winning two of the three with a broken ankle. But back in 2009 Keselowski heard all about his own integrity when he won at Talladega – then driving for James Finch – when he and Carl Edwards got together in a scary accident on the last lap.

“I want to win as bad as anyone else,” Keselowski said. “Sometimes more. I don’t want that win to be discredited in any way, shape or form. If that means I have to lose a few to make sure that the wins I have are credited the right way, then I’ll do that. I guess it’s tough because one of my defining moments was my first win at Talladega. I think some people may have questioned the integrity of that win and how far I was willing to go.”

In that win, Keselowski had gotten together with Edwards who went flying into the fence. Opinions were mixed on whether Keselowski went up and hit Edwards or whether Edwards came down and spun himself. While Keselowski acknowledges – even calling that race not a real win earlier this year – he says that there are other integrity issues like drivers stopping on the track to cause a caution. Or when NASCAR finds a car to have an illegal part.

“I’m not going to say that I’m always innocent but I’m trying to make sure that I win without those things,” said Keselowski. “When you look at the sport, the perception is, and it always has been, that stock car racing is about drivers. That’s why drivers get the most pay and sponsors go with the drivers. It’s not supposed to be about who has the best cars. It never has been. It does always kind of morph its way into that.”

It’s important to the honor and credibility of this sport, says Keselowski that drivers win because they are the best. Pushing and shoving, bump and runs are great in Keselowski’s book, actions that he’s been criticized in the past for. Those moves, however, are ethical and what racing is all about. It’s fun and entertaining for all involved.

“If you win a race because you have a cheated-up part that nobody else had and your car is faster, I think that kind of goes against the integrity of the sport and what has made NASCAR so successful to date,” Keselowski said. “So, I think that there are two distinct lines so to speak.”

Even after all that, Keselowski said it was a hard question to answer. But as long as everyone knows where he and his Penske team stand, that’s the main point. Winning is everything in this sport but that doesn’t mean you’ll see Penske go into that area of doing just about anything to win. And speaking of that area, Keselowski saw a few ethical lapses this week.

“There are so many of them, I can’t list them all,” he said. “This was a rough week. To be honest, some people would point at [Michael] Waltrip’s cars, but I didn’t really make much of that one to be honest. I thought that was just racing. Whatever happened with Jimmie [Johnson], we’ll never know on that car. So, I don’t see how you can really point your finger at that deal. We’ll never know. I don’t have answers on it.”

He did have an answer for the biggest ethical lapse of the week.

“I thought it was remarkable the things the 3 truck [Austin Dillon] got away with,” said Keselowski about last weekend’s race in Talladega. Dillon appeared to have dipped below the out of bounds line on two different occasions and wasn’t penalized. He remained the point leader heading into Martinsville.

“That would probably be the big one,” said Keselowski. “I thought that was remarkable.”