Junior Has a Solution and Maybe a Leader is Born 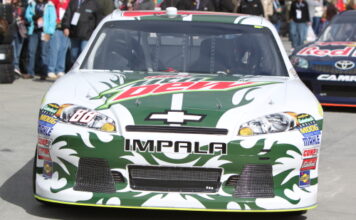 All the talk at Martinsville Speedway this weekend was about Talladega. It wasn’t just the drivers, who did their share of talking, but it also included some media members and fans. Of course, a lot of it revolves around the sport’s most popular driver and the son of NASCAR’s most favorite legend, Dale Earnhardt, Jr. [/media-credit]Junior was in a mood this weekend, offering a solution to the “two-car tango” and why he and drafting partner hung around the back of the field too long to be a factor in the Talladega race. Junior offered a solution to break up the pairing to two cars that has been the fashion for the better part of a year. It was the spoiler according to Junior.

“I think the spoilers are way too big,” Earnhardt said Friday at Martinsville Speedway. “When I look at that spoiler, I can’t imagine there was a lot of study that went behind how effective it would be and what it would do, it is just a big square piece of steel, as wide as it could possibly be, and pretty tall. Make the spoiler more narrow, or smaller, run some softer springs in the back to get the cars a little lower. They have to make the hole that we punch in the air a little smaller. Right now it is so giant it is very easy for another guy to fit up in that void and draft and push all the way around the race track.

“They need to bring the ceiling down that the car creates by the hole it pushes in the air, the car just punches a hole in the air and they need to bring that hole closer to the ground,” he said. “Get a little bit more air on the second car’s windshield cause a little more drag on that car. I think the spoiler is just way too big. The corners on the ends, they could cut those off and round that spoiler off, going back to anywhere from 1998 to 2004, that type of spoiler was a little bit better, even smaller than that.”

No comment from NASCAR right now, but Junior made a lot of sense here, and maybe grew up a little bit. My criticism has always been that not enough has been done to solve the problem that has been restrictor plate racing. If we need them, fine, but find a way to make it a better show. So far, it has appeared that NASCAR just doesn’t know the answer, and maybe that’s true. Far be it from me to make that decision. I am not an engineer and I’m sure NASCAR has plenty of those types in their employ.

Junior, as many have published, wasn’t too keen on hanging in the back last week. Though he won’t come out and say it because it would be politically devastating, radio transmissions seem to show this. Just like the supposed team orders that Trevor Bayne was so upset with, it appears that Earnhardt was just as frustrated. His role was to push his teammates to a good finish or a victory, as he was held back.

The killer quote was one that was published in an interview this week.

“I’m certain that a lot of things would be different if the old man was still around.”

Indeed. Dale Earnhardt, Sr. had the ear of NASCAR. It’s time for someone to step up and take that role. Maybe that’s what is needed today—a leader. And just maybe, Dale Jr. is assuming that role. It appears there isn’t a leader among the drivers. Maybe Junior grew up after the debacle in Alabama. And maybe that will inspire him to victory at Martinsville or somewhere else.

Ron Fleshmanhttp://www.ris-news.com
Ron Fleshman has followed NASCAR racing since attending his first race at Martinsville Speedway in 1964. He joined the Motor Sports Forum on the CompuServe network in the 1980s and became a reporter for Racing Information Systems in 1994. In 2002, he was named NASCAR Editor for RIS when it appeared on the World Wide Web as www.motorsportsforum.com. He can now be found at www.ris-news.com. Ron is a member of the American Auto Racing Writers and Broadcasters Association. You can find Ron following and reporting on the top three NASCAR divisions each week. As a lifer in his support of racing, he attends and reports on nearly 30 events a year and as a member of the motor sports media, his passion has been racing for 47 years. He lives with his family in rural West Virginia and works in the insurance industry when not on the road to another track.
Previous article
Federal-Mogul’s Champion® Brand to Offer $100,000 in Racing Sponsorships Through Web-Based ‘Search for a Champion’ Contest
Next article
Smoke Steals One at Martinsville