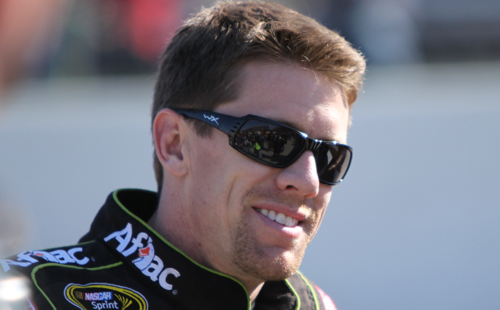 As the boys moved on from Martinsville en route to Texas, the Chase has come down to essentially a two man race. Carl Edwards went to Virginia hoping to avoid disaster, which would have been to maintain his average of 16th place finishes there, but moved up in the end to claim 9th. Tony Stewart was in junk all day, told his crew that nothing they did seemed to change that fact, yet moved around Jimmie Johnson in the late stages to claim his third win of the Chase. It was called the Turns Fast Relief 500, and for a pair of guys it sure did. [/media-credit]Eight points separate Edwards from his nearest challenger, and if you don’t think wins matter this season, think again. Stewart is eight back, but if those three Chase wins had turned out to be just runner-up results the difference would have been 20. Wins matter, and after what took place last Sunday so does Stewart.

As they move into the Lone Star state, some have a chance if Edwards, at least, finds himself about as lucky as the hare who sacrificed the rabbit’s foot. Kevin Harvick was 4th last weekend and now sits third in the standings, 21 points out. Brad Keselowski was 17th, and he finds himself 27 points back. The rest don’t matter unless Texas turns into the Alamo for the leaders. So, what are the chances?

Edwards has won at Fort Worth three times in 13 starts, but has an average finish of more than 16th. More than half the time he is outside the Top Fifteen, three times 33rd or worse. Stewart has ran there on nineteen occasions, won there five years ago, and has an average outcome of 13th. Six times he has finished fifteenth or worse, three times outside the Top Thirty. Advantage Stewart, unless Edwards wins. I guess that means you will have to watch the action to see how this turns out.

Harvick has never won there, but 60% of his seventeen encounters have ended with him inside the Top Twenty. Keselowski has not done much of anything in his four visits, so that does not bode well for him. Should both Edwards and Stewart falter, Harvick has a shot of getting back into it. If Edwards claims his fourth victory at the track, then Phoenix and Homestead could be somewhat anti-climatic.

While you will be watching the action from Texas, my family and I are taking a short break to visit New York City, Philadelphia, and Gettysburg. We know we should expect to see tall buildings, the Liberty Bell, and the site of Pickett’s Charge on our tour. I don’t know what to expect at Fort Worth, other than maybe the unexpected. The picture should be much clearer when I return as the boys head to Homestead in a couple of weeks. Enjoy your week.