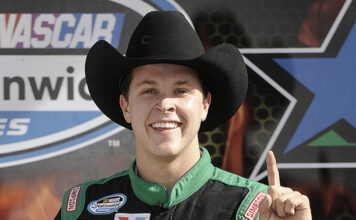 [/media-credit]“This is just as surreal as the 500. That’s hard to say, but this has been so long. We’ve worked so hard to get our first Nationwide win and I wasn’t sure if it was ever gonna happen. I was thinking maybe the next Cup win would come first, but these guys worked their butts off to get us here and God pulled us through.” Bayne said.

Bayne’s win was the 13th for Mustang in its inaugural season and is the most among all manufacturers. Bayne also captured Roush Fenway Racing it’s 299th all-time win in the NASCAR Sprint Cup and NASCAR Nationwide Series combined.

This win also secured Ford its third manufacturer championship in the Nationwide Series.

“We’re thrilled to win the NASCAR Nationwide Manufacturers’ Championship. Not only is it our first since 2002, but, more importantly, it’s the first championship for Mustang in NASCAR. Mustang, as it has for 47 years, continues to be a force in all forms of racing. This has been a great year for Ford and Roush Fenway in Nationwide, with Carl, Ricky and Trevor all providing some great moments and 13 victories. Now, it would be great to add the driver’s championship by Ricky to this special year for Mustang and Ford.” said Jamie Allison, Director, Ford Racing.

Edwards dominated most of the race and led 157 of the 200 laps. But Edwards had to settle for third place after Denny Hamlin, while subbing for the suspended Kyle Busch, passed him in the final laps for second place.

“He earned that one. He drove really well. That restart he did a really good job.” Edwards said.

“We didn’t get the best restart there and those guys on the outside line really had an advantage and they were able to pull us and just took us that long to get back to them. Took a long time to get this car where I felt like I wanted it and at the end we had a car that could contend for a win and that’s all you can ask for.” Hamlin said.

“That was fun. We were just a little bit too tight to keep in front of the 22 and run a couple more down, but it was awesome to see Trevor get a win this year in the Nationwide Series. This wraps up a Ford championship for manufacturers, so that’s awesome. It was a good day for the Sam’s Club Members Mark Angus Beef Ford.” Stenhouse said.