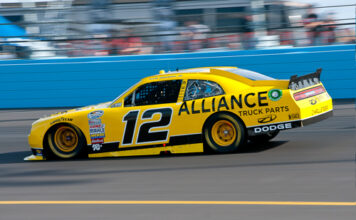 We knew Sam Hornish Jr. had a good car all day long, but for the three years he was racing in the NASCAR Sprint Cup Series, it seemed like he couldn’t find any luck. Hornish finally found the lucky charm as he played the two tire strategy and held off teammate Brad Keselowski for his first NASCAR Nationwide Series win on the new configuration at the Phoenix International Raceway. [/media-credit]The first lap proved to be very treacherous for drivers as an eight-car crash ensued on the first lap in Turn 3 when Brian Scott was turned head-on by Reed Sorenson into the outside wall. Jeff Green, Danica Patrick, Johnny Chapman, Ron Hornaday, Matt Frahm, and Tim Andrews all couldn’t avoid the melee.

Reed Sorenson didn’t receive any damage from the incident despite spinning, but later met karma as he lost a right-front tire and pounded the wall. A fire burst from the hood and NASCAR safety crews were sent to extinguish the fire. This crash doesn’t help Reed’s cause to keep position #5 in the point standings.

Canadian native D.J. Kennington saw his day come to an end with a cut tire, along with Mike Bliss and Derrike Cope who were both involved in separate incidents.

Elliott Sadler saw his championship hopes crumble after being wrecked by Jason Leffler going into Turn 3. Sadler had passed Leffler moments before and gave him extra room just to be safe, but Leffler drove into Turn 3 too deep and tapped Sadler. Morgan Shepherd drove into the carnage as this was the second incident he was involved in during the day. This accident caused a red flag as officials were sent in to clean up the mess.

Sam Hornish Jr. had led 62 laps into the race, but the man of the day was Ricky Stenhouse Jr. who had led 62 laps. When it came to the final pit stops, Hornish took a gamble for two. Many sports analysts on Twitter doubted Hornish and didn’t believe two tires would work on the new configuration. Hornish proved everyone wrong to win the race!

Will this set Hornish up potentially for a Sprint Cup ride next year? Or is this just considered ‘Beginners Luck’?

Ryan O'Harahttp://www.twitter.com/RyanPrakOHara
Ryan O'Hara is the Senior Writer of FightNights.com and is recognized as one of the top boxing writers in America. He is also a former Fox News Radio news anchor and TV Producer for several networks. O'Hara graduated with his Masters in Human Security in 2017 with a 3.7 GPA and also obtained his Bachelor's Degree in 2015 in Global Security & Intelligence Studies -- all from Embry-Riddle Aeronautical University in Prescott, Arizona. O'Hara is also a former college ice hockey player and skates in his free time. Follow him @OHaraSports on Twitter!
Previous articleTOYOTA NASCAR Nationwide Series (NNS) Post-Race Notes & Quotes Phoenix International Raceway
Next articleM&M’s Mars NASCAR’s Teaching Sponsor In More Ways Than One